The Australian manufacturer of integrated optical chips has bought its US partner to own the complete light-source solution for laser TV. 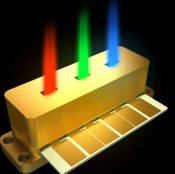 In a week when Mitsubishi wowed the world with its 65-inch laser television at the Consumer Electronics Show in Las Vegas, two companies that have been instrumental in developing the optical chip technology needed for laser TVs have become one. Australian company Arasor, buoyed by a $300 m joint venture with Chinese telecoms equipment maker ZTE, has bought Novalux for $7 m in Arasor stock and has also assumed Novalux's outstanding debts – bringing the total cost to around $20 m.

According to Arasor, the acquisition will allow the company to provide a complete light-source solution for laser TVs, as well as for mobile phones, navigation systems, cinema screens and pocket lights. "No other company will be able to provide this unified solution," commented Arasor chief executive Simon Cao.

Novalux and Arasor have already been working together to develop and demonstrate a chip-based solution for projecting red, green and blue light onto a television screen. "There are two key components: the infrared Necsel laser [produced by Novalux] and the periodically poled lithium niobate (PPLN) chip that converts the infrared to visible RGB," Greg Niven of Novalux told optics.org.

"Arasor is the maker of the world's best PPLN," Nevin continued. "Therefore, the marriage of the two companies puts together all the components needed to make RGB lasers. It is a very exciting coming together of the two technologies."

According to Niven, the existing Novalux facility in Sunnyvale, California will remain unaffected, since "this is where we actually grow the Necsel laser epiwafers". Indeed, Niven says that additional Arasor employees will be located at the existing Novalux site. The business will operate as a division of Arasor, led by Novalux COO William Mackensie, although the official name of the division has not yet been decided.

Novalux's Necsel laser platform is based on high-power surface-emitting diode lasers that allow efficient frequency doubling into the red, green and blue. Necsel already produces 3 W at green and blue wavelengths, while the company is still aiming to increase the power output at red wavelengths from the current best figure of 1.5 W.

For its part, Arasor sees the acquisition as a crucial part of its strategy to stimulate and control the market for laser TV. "We are excited to be able to provide a complete light source solution for the major brands and the ZTE joint venture," said Cao. "This significantly increases our earnings potential and out ability to negotiate with large global customers." Arasor had hoped to acquire laser diode manufacturer Alfalight in 2007, but the all-stock deal fell through when Arasor’s share price dropped from AUS$3.09 to AUS$2.00.

Key to Arasor's current buying power is the joint venture with ZTE, which was finalized in November. Although Arasor owns 51% of the joint venture, financing to the tune of $300m has been provided by the China Development Bank to further develop the laser technology and to establish production capabilities that are due to come onstream in the second half of 2008. The ultimate end-game for the joint venture will be to develop an extensive and scalable manufacturing capacity that will ramp up to produce 6 million laser sources and 2.4 million integrated light sources per year.

It's not yet clear whether the Arasor/Novalux technology was used in the laser TV that Mitsubishi unveiled at CES this week. Indeed, it has been reported that the 65-inch unit - which Mitsubishi says could be on the shelves later in 2008 - contains one of Texas Instruments' Digital Light Processing chips together with a REALD that would allow 3D movies to be played in the home.

However, Cao is confident that that the joint venture, together with the Novalux acquisition, will ensure Arasor takes the lion's share of the back-end laser TV technology market. "With our recently announced joint venture with ZTE, Arasor has control of the value chain, path to market and significant external capacity to finance the growth of the laser display market well into the future," he said.