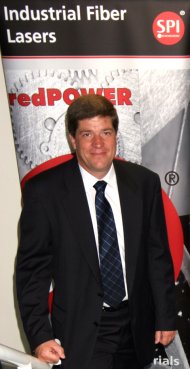 Fiber laser company SPI Lasers ("SPI") has raised £10.0 million ($19.5 million) via institutional placings of 5,250,000 new ordinary shares priced at £2 each. The placings, made in two stages, were underwritten by Panmure Gordon, which acts as corporate broker and adviser to the company. (see related story).

SPI says it will use the money for several purposes: to further develop new market verticals in "micro" (micron-scale) and laser-marking fields; to expand the company's sales presence in the US and Asia; and to improve its fiber laser manufacturing efficiency.

"We are delighted to complete this fundraising and have already seen a positive response from a range of high quality institutions," said David Parker, CEO of SPI Lasers. "We believe that the company is now appropriately capitalised to fund the company to profitability."

The company has this week posted a circular to shareholders giving notice of an extraordinary general meeting of the company on 22 February 2007 to approve the allotment of the Placing Shares and to disapply pre-emption rights in connection with the them. The Placings are conditional on the passing of the resolutions at the meeting.

Application will be made to the London Stock Exchange for the new Ordinary Shares to be admitted to trading on the AIM (the Alternative Investment Market; the "junior" market, established in 1995, for the trading of shares of relatively small companies).

As announced on 9 January 2007, the company's directors expect that revenues for the year ended 31 December 2006 will be in line with the market estimate of £7 million.

SPI says it has made "significant progress" over the last quarter of 2006 and into 2007. The group is now shipping 200 W fiber lasers for Micro applications, and pulsed lasers in volume for marking. Having won over 30 new accounts in micro, and with several new verticals opened in the past six months (welding, consumer electronics, automotive, medical and diamond processing), SPI added that it has also seen strong demand for its new marking lasers with purchased trials at over 15 accounts and volume shipments to at least five accounts.

After more than doubling product sales in 2006, the SPI Group has entered 2007 with a record order book of approximately £5 million for the first half of 2007, including $4 million in marking, $2 million in medical aesthetics and $2 million in "micro".

With key trials currently underway which should lead to sales in the second half of 2007 in semiconductor and consumer electronics sectors, a strong increase in activity in Asia and a qualified pipeline of new opportunities currently standing at around £9 million and expected to rise to around £20 million through the current year, the directors say they are confident that SPI will continue to deliver the recent strong growth experienced by the business.