Scientists use a broadband light source to manipulate fluid flow in millimetre-sized channels, a process that could help to speed up mixing in microfluidic networks.

Researchers at the Hungarian Academy of Sciences are using light to control the velocity of liquid flowing through tiny pores by incorporating a photoconductive material into the channel structure. Ideal for microfluidic systems, the technique exploits the concept of electro-osmosis and relies on changes in the local electric field to modulate the flow. (Appl Phys Lett, 89 263508)

"We can use light to switch the flow on and off and change the direction of flow at a junction," Pal Ormos, director of the Institute of Biophysics, told optics.org. "Light is easy to handle and brings an additional degree of freedom to microfluidic systems."

The system works by using light to manipulate the local electric field, which in turn affects the electro-osmotic driving force and changes the flow rate. In simple terms, illuminating the channel with light reduces the flow rate.

To test their concept, the researchers built a microfluidic channel measuring 0.1 x 0.2 x 10 mm. The structure was formed by placing a PDMS top plate, prepared using soft lithography, over a glass slide coated with a 200 nm thick photoactive layer of cadmium sulphide (CdS).

"Cadmium sulphide absorbs across a broad spectrum from 550 nm down to below 400 nm and can be excited effectively with a mercury lamp," said Ormos. "To avoid exciting the CdS layer during observation, we use a red (600 nm) LED source to view the process." 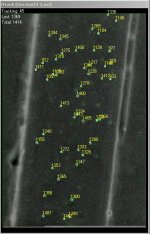 The team captured the flow of water seeded with 2 micron diameter polybeads on video and analysed the flow field using particle tracking velocimetry. By illuminating the photoconductive bottom of the microchannel for 30 seconds, the researchers were able to reduce the flow velocity by more than a factor of five from 45 µm/s to just 8 µm/s. Ormos adds that 30 seconds was simply a convenient time interval for the flow measurement. It turns out that the velocity transition time is actually closer to 1 second.

To explore the process in detail, the scientists used a 3D finite element method to model the behaviour of an optically controlled Y junction. "Simulation helps us to determine what kinds of light controlled flow patterns are possible and what geometries and voltages are required," explained Ormos. "Eventually, our software could also function as a design tool."

Looking at potential applications, light-activated switching could play a key role in helping to speed up mixing in tiny channels. "Mixing is a great problem in microfluidics as the flow is always laminar and the rate of mixing is limited by diffusion, which is slow," Ormos said "One idea is to use light to change the flow patterns in microscopic reaction chambers."

Back in the lab, the researchers are working on a range of different flow pattern geometries and are busy tying to identify a light sensitive layer that suits biological systems. Keen to commercialize its system, the team believes that medical diagnostics could be a key market.

James Tyrrell is News Editor of Optics & Laser Europe magazine and a contributor to optics.org.