Researchers in the UK have made a new type of hybrid electrode from multiwalled carbon nanotubes and indium-tin oxide that could be used for solar cell applications.

The nanotubes are directly grown on indium-tin oxide coated glass, a transparent electrode commonly employed in organic optoelectronic devices, such as solar cells and light-emitting diodes. The nanotube electrodes are highly transparent at longer wavelengths, making them ideal for harnessing light from the Sun. 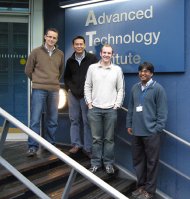 Organic solar cells are cheaper and easier to make than their inorganic counterparts but their efficiencies and lifetimes remain an issue. This is because charge carrier mobilities - especially those of holes - are low, which limits the current flowing through the device. One way of overcoming this problem is to reduce the thickness of the active layer, but doing this also reduces the solar cell's ability to absorb light.

An alternative approach, adopted by Ravi Silva and colleagues at the University of Surrey, is to use an electrode that penetrates into the organic layer and which extracts charge carriers so that they are free to move through the device.

Silva's team has shown that it can grow multiwalled carbon nanotubes directly onto indium-tin oxide (ITO) coated glass using chemical vapour deposition (CVD) techniques. Multiwalled carbon nanotubes are very good electrical and thermal conductors and can therefore function as part of the underlying electrode. The scientists demonstrated that the nanotubes act as interpenetrating electrodes over large surface areas and efficiently help to extract positive charge carriers, or holes, from the active layer in the organic devices. "Crucially, these electrodes have high transparency, particularly at longer wavelengths, making them well matched to the solar spectrum," Silva told nanotechweb.org.

The Surrey team tested its solar cells using a "solar simulator" that provides light with a power of 100 mW/cm2. It found that the same number of photogenerated electrons are extracted, despite around a 30% reduction in the amount of light entering the cell, with an overall efficiency as high as around 1%. "Since the CVD growth method is scalable and relatively low-cost, we envisage the widespread utility of multiwalled carbon nanotube electrodes of this type in organic solar cells," said Silva. "The electrodes will facilitate efficient charge carrier extraction upon improved matching of the photoactive matrix with the solar spectrum".

The team reported its work in Appl. Phys. Lett..