Tropical beetle has the brightest whites

The secret behind the brilliant white shell of a peculiar tropical beetle is an unusual, aperiodic structure, according to physicists from the UK.

Electron microscopy revealed that a random network of protein filaments allows the shell to scatter light with high efficiency.

The protein structure, which is at least two orders of magnitude thinner than manmade materials of equivalent whiteness, could be imitated in future synthetic systems (Science 315 348).

The bright colors of certain insects are normally down to either a strong pigmentation or a highly periodic structure. But these properties cannot be responsible for insects with brilliant white shells, because white light needs a scattering process that covers all the visible wavelengths.

This mystery encouraged Pete Vukusic and his colleagues from Exeter University in the UK to investigate Cyphochilus, a species of beetle renowned in entomological circles for its unusually bright white shell.

After examining electron microscope images of the shell's interior, they discovered a network of nanoscale protein filaments that were completely devoid of any periodicity. These unordered filaments have a very different refractive index to the air that surrounds them, meaning they can scatter light over the entire visible spectrum. 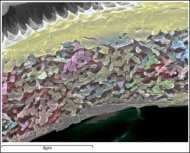 Although randomness is the key to scattering white light, the aperiodic structure of Cyphochilus does it much more efficiently than many other insects, such as the common Cabbage White butterfly.

Vukusic said the reason for this efficiency is that the filaments are less crowded, so the light can interact with individual filaments. However, he added that if crowding were reduced further it would diminish the scattering itself. "It's a fine line, but this beetle seems to have achieved a good compromise."

I Wanna Hold Your Hand...

The physicists now think that their discovery could lead to a new generation of bright white materials, which cannot currently be made as thin as the beetle's 5 µm thick shell.