Scientists at IBM have this week announced that they have built an optical device on silicon which is capable of delaying the flow of light on a silicon chip. Thhis is a stepping stone towards any future all-optical computer. 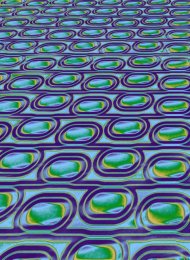 Researchers have long known that the use of optical instead of electrical signals for transferring data within a computer chip might result in significant performance enhancements since light signals can carry more information faster. Yet, "buffering" or temporarily holding data on the chip is critical in controlling the flow of information, so a means for doing so with light signals is necessary. In work announced this week, IBM believes it has achieved just such a means for buffering optical signals on a chip.

"Today's more powerful microprocessors are capable of performing much more work if we can find a way to increase the flow of information within a computer," said Tze-Chiang "TC" Chen, vice president Science and Technology for IBM Research. "As more and more data is capable of being processed on a chip, we believe optical communications will eliminate these bottlenecks. As a result, the focus in high-performance computing is shifting from improvements in computation to those in communication within the system."

Long delays can be achieved by passing light through optical fibers. However, the current "delay line" devices for doing so are too large for use on a microchip, where space is precious and expensive. For practical on-chip integration, the area of a delay line should be well below 1 mm2 and its construction should be compatible with current chip manufacturing techniques.

IBM scientists were able to meet this size restriction and achieve the necessary level of control of the light signal by passing it through a new form of silicon-based optical delay line built of up to 100 cascaded "micro-ring resonators", built using current silicon complementary metal-oxide-semiconductor (CMOS) fabrication tools. When the optical waveguide is curved to form a ring, light is forced to circle multiple times, delaying its travel.

The optical buffer device based on this simple concept can briefly store 10 bits of optical information within an area of 0.03 mm2 equivalent to 10% of the storage density of a floppy disk, and a significantt improvement on all previous results. IBM says this advance could potentially lead to integrating hundreds of such devices on a single silicon chip. This would be an important step towards on-chip optical communications.

The report on this work Ultra-compact optical buffers on a silicon chip by Fengnian Xia, Lidija Sekaric and Yurii Vlasov of IBM's T.J.Watson Research Center in Yorktown Heights, N.Y. is published today (December 22) in new journal Nature Photonics. The research and development has been partially supported by the US Defense Advanced Research Projects Agency (DARPA) through the Defense Sciences Office program "Slowing, Storing and Processing Light".