A team of engineers at solar cell manufacturer Spectrolab has produced a photovoltaic system with a record-breaking conversion efficiency of 40.7%.

The solar cell, made from gallium arsenide grown on germanium, is said to offer the highest efficiency of any type of solar photovoltaic device yet produced. For comparison, the efficiency of silicon solar cells -- which currently dominate the photovoltaic market -- is typically less than 20%. 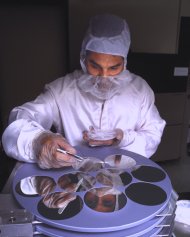 The new result is the latest in a series of record-performance cells produced by Spectrolab over the past five years, and was made possible by an improvement in conversion efficiency within the company's metamorphic photovoltaic structures. The US National Renewable Energy Laboratory (NREL) has verified the milestone, which Spectrolab believes should help III-V semiconductor technology to increase its penetration of the market for terrestrial solar power systems.

Spectrolab CEO David Lillington hailed the achievement, and said that once the high-efficiency cells were qualified, they could be manufactured in "very high volumes" with little impact on production flow.

Spectrolab currently operates a 1 MW/year production facility for its ultra-triple-junction (UTJ) solar cells, which were first developed in 2003. More than 150,000 space-qualified solar cells with a minimum average efficiency of 28.3% have been delivered to flight programs since then. 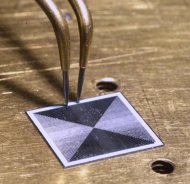 At Compound Semiconductor's Key Conference in San Antonio, Texas, last month, Spectrolab's Hojun Yoon, part of the research team that developed the record-breaking cell, said that increasing conversion efficiency was the key to reducing the cost of concentrator photovoltaics (CPV) to a point that would be broadly acceptable in the terrestrial market.

"A 40-50% efficient cell could make the market explode," said Yoon, adding that III-V cells were en route to hit 45% efficiency within three years.

Richard King, the principal investigator within Spectrolab's high-efficiency solar cell development, said that the use of metamorphic - rather than lattice-matched - materials was a key part of the achievement. "The excellent performance of these materials hints at still higher efficiency in future solar cells," added King.

Spectrolab's metamorphic structures are based on three individual cells grown on top of one another using MOCVD and connected in series. Thick layers of p-doped GaInP, GaInAs, and the germanium substrate each absorb different wavelength bands to yield the high-efficiency conversion of solar radiation. The structure has a total of 19 layers, but the epitaxial layers are just a few microns thick and 95.3% of the cell is germanium.

Having recently had its cells deployed commercially as part of a 33 kW electricity generating system in Australia, Spectrolab said that it expects several more multi-million dollar supply contracts to be signed within the next few months.

Spectrolab's rivals in the III-V photovoltaics sector, Emcore and Sharp Corporation, have also been busy meeting production orders in what has become a key area of growth for the compounds sector (see related stories).