• Japanese chemical maker Tosoh Corp. has developed a low-cost alternative to an indium-based material used in the production of liquid crystal displays. The Tokyo-based company has developed a lower-priced zinc-based product that is as effective as the current product, indium tin oxide (ITO) target. ITO target is essential for transparent electrode membrane assembly inside LCD panels. Rocketing demand for flat TVs has pushed the price of indium up sharply over the past few years, raising the procurement costs of LCD TV makers such as Sharp Corp. and encouraging the search for alternative materials. Environmental pollution problems have been another driver. Tosoh has built a small production line for the zinc-based material and a major LCD manufacturer is considering adopting the new product, the Nihon Keizai newspaper said. Indium spot price has fallen more than 30% to $685 per kg from $1,000 per kg in mid-February. But the price is still some 10 times the level of 2002.

• Huawei Technologies this week announced that it expects full-year contract sales to reach $11 billion by the end of 2006. In its first half of the financial year (H1'06) the Chinese giant recorded contract sales of $5.2 billion, an increase of 29% on H1'05. Its H1'06 contract sales from international markets reached $3.4 billion, up 36% on 2005 and two-thirds of total contract sales in the six months. "We expect to deliver sustainable growth as industry adoption of IP-based technologies, such as IP Multimedia Subsystems accelerate network transformation," said Xu Zhijun, Huawei's Executive VP and Chief Marketing Officer. 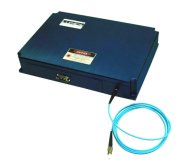 • Lumics, a manufacturer of laser diode and fiber laser assemblies has launched a pulsed fiber laser series with an average optical output power of 5W and 0.5mJ pulse energy. The LU1065F005 is a pulsed ytterbium fiber laser in Master Oscillator Power Amplifier configuration. Programmable through a conventional USB computer interface, the laser offers a pulse repetition rate from 10 to 100 kHz and a pulse width from 50 to 250 ns. The laser emits at a wavelength from 1060 to 1080 nm from a optical fiber.

• Osram Opto Semiconductors has appointed Intelligent Display Solutions to be its OLED display specialist for the UK and Ireland. Pictiva OLED displays have been developed and introduced by Osram, which believes OLED technology to be "key" for future advances in the lighting and display marketplace.

• Goodrich has been awarded a contract from the US Air Force Unmanned Aerial Vehicle Battlelab at Nellis Air Force Base, Nevada, to develop and fabricate a shortwave infrared sensor for the Spectre-Finder initiative. The initiative aims to show the potential of a small, air-launched and recoverable unmanned aircraft system to provide off-board sensing.

• IMRA America, a developer of ultrafast fiber lasers, and Aculight, which makes laser system solutions for defense, aerospace and medical applications, have signed a license agreement for IMRA's amplification technology. The technology will enable Aculight to continue to expand its fiber laser output energies and peak powers while retaining high beam quality.

• Nuvonyx Europe has announced the appointment of Roditi International as representative and technical support for its high power laser diodes for the UK & Irish markets. Roditi took over distribution in mid-November following the Retirement of George Bailey, GB Enterprises.

• NeoPhotonics has appointed Michael Sophie to the company's board of directors and chair of its audit committee. Sophie currently sits on the boards of directors for McData Corp., a provider of storage networking solutions; BCD Semiconductor, an analog and mixed signal IC products company; and Postini, a provider of on-demand message management services.

• Alastair Wilson has been appointed director of the UK's Photonics Knowledge Transfer Network (KTN). The Photonics KTN was set up by the UK government's Department of Trade & Industry in July to promote technology transfer within the UK photonics market, and will receive £3.3 million over the next three years to encourage collaboration between academic and industrial partners.