A 240 lm single die light source, developed by Seoul Semiconductor, is claiming the crown of "brightest ever" LED.

Seoul Semiconductor has released a single-die white source that can emit up to 240 lm at its maximum drive current of 1 A. The new "P4" emitter is also claimed to offer the world's highest luminous efficacy, coming at 100 lm/W at the 350 mA at the 350 mA drive current that is required for general illumination applications.

For comparison, a conventional fluorescent lamp offers an efficacy of 70 lm/W, while an incandescent bulb delivers 15 lm/W. Seoul says that two types of commercial device are available – one operates at a typical efficacy of 100 lm/W at 350 mA, and the other is rated at 80 lm/W.

"The P4 is making history in the lighting industry as the alternative to conventional fluorescent and incandescent lighting sources," said Jung Hoon Lee, CEO of Seoul Semiconductor. "Conventional LEDs have been known to emit more than 100 lumens with several dies. Seoul Semiconductor's P4 is the only LED product in the world with 240 lm via a single die." 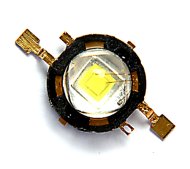 Seoul says that the high luminosity was reached through its proprietary phosphor and packaging techniques, and further improvements are in the pipeline. A 135 lm/W source is due to emerge next year, and more incremental improvements are expected to lead to 145 lm/W performance early in 2008.

In October this year, Cree revealed its brightest commercial product - a 160 lm white LED XLamp, which is said to operate with 85 lm/W efficacy at 350 mA drive current.

Meanwhile, researchers at Nichia’s laboratories recently published a paper in the Japanese Journal of Applied Physics detailing a high-power white LED capable of producing 402 lumens at 2 A, and a luminous efficacy of just over 90 lm/W at 350 mA.