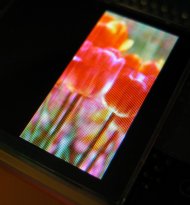 Prior to TMA, large OLED displays have only been feasible by using active-matrix (AM) technology, which requires an expensive thin-film transistor layer. Passive-matrix (PM) displays, which are driven by cheaper external chips, have been restricted to smaller screen sizes. According to CDT, TMA is a technology that could be incorporated into driver chips to bring active-matrix capabilities to passive-matrix displays.

The effect of TMA on the size of OLED-based displays could be dramatic. Current passive-matrix OLED displays are usually no more than 2 inches across but Terry Nicklin, CDT's marketing manager, told optics.org that TMA will permit an OLED display up to 10 inches across, and with enough detail to function as a small TV screen.

"With TMA, we could offer a compelling alternative solution that extends the capabilities of passive-matrix drivers into the AM space. In addition, TMA can expand the range of panel sizes that can be addressed using PM driver," said David Fyfe, chairman and CEO of CDT.

The TMA driving system can be used with both polymer and small-molecule OLED displays. CDT is currently considering how to bring the technology to market in the shortest possible time. A working demonstrator has been created using individual electronic components that exploit the new driver and image processing technologies.

The company is also in discussion with OLED display producers and IC driver companies with a view to commencing design work for commercializing TMA as soon as possible.

One of the first demonstrations of the technology was a TMA-driven 160x120 pixel color screen (approx. 1/4 VGA) shown at the Intertech OLEDs 2006 Conference in San Diego on November 15.

• The LED Quarterly Insights report on organic LEDs will be released in December. To get a unique insight into this fast-moving sector, order your copy now.