A laser-based technique that can monitor blood-flow velocity in real-time could have a big impact on the efficacy of plastic and reconstructive surgery.

Scientists at Canada's National Research Council Institute for Biodiagnostics in Winnipeg have developed a system for measuring blood-flow velocity in tissue that is significantly cheaper and faster than current methods. Based on so-called laser speckle imaging (LSI), their approach has the potential to quickly determine whether or not damaged tissue will heal, and it could one day make many surgical procedures safer and easier. 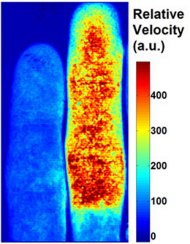 It is essential that a wound or area of damaged tissue has enough blood flowing through it if it is to heal properly. In plastic and reconstructive surgery, for example, the rate of blood flow to a skin flap can determine whether a graft will survive or fail.

"The consequences of a failed flap are significant, in terms of both the health of the patient and the cost of a repeat procedure," explained team member Michael Smith.

At the moment, though, surgeons must generally attempt to determine the viability of damaged or reconstructed tissue without the benefit of blood-flow imaging.

There are already commercial systems to measure blood flow, such as laser Doppler imaging (LDI), but these are currently far too slow to be useful in surgery.

The Canadian team thinks its system can fill this gap. "Laser speckle imaging has the advantage of being capable of achieving higher spatial and/or temporal resolution than LDI, as well as being cheaper and easier to implement," Smith told medicalphysicsweb. While the concepts behind LSI are well known, it is not a widely used technique and there are as yet no commercial products on the market.

Laser speckle is an optical interference effect that's observed when laser light is incident on a rough surface, such as living tissue. The light and dark "speckles" are caused by constructive and destructive interference of the scattered light. The speckle pattern fluctuates if the illuminated area contains moving particles, like blood cells. Analysing these fluctuations yields information about blood-flow velocity.

The LSI system is cheap and simple, comprising a red laser, a high-resolution camera, and a computer with image-capture and analysis software. Data acquisition takes around 1 s, - significantly faster than LDI, which takes up to 30 min to obtain a comparable image.

"Laser speckle imaging could be a very useful tool for the plastic surgeon, particularly if it could be combined with other technologies, such as NIR [near-infrared] reflectance imaging," said Smith.

So far, Smith and colleagues have tested their LSI system on a human finger and a flap of skin on a rat. Those studies confirm that LSI is capable of producing real-time blood-flow images that differentiate between situations of normal, decreased and increased flow.

Although the researchers are not currently talking to industrial partners, they are confident about the technique's clinical potential. Work is also in progress to develop a NIR reflectance imaging system that will work in tandem with LSI.