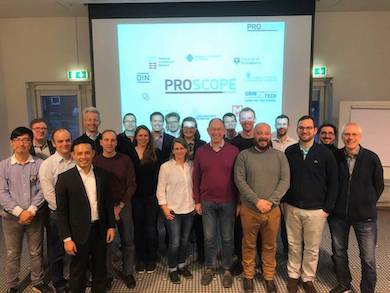 A project funded by the EU's Horizon 2020 program is on course to develop a new imaging system for the diagnosis of bowel cancer.

PROSCOPE, officially titled "Point-of-care instrument for diagnosis and image-guided intervention of colorectal cancer," was launched in 2020 and backed by €6 million of EU funding.

The project has now carried out an 18-month formal review, confirming that its research program is on target to help reduce the 160,000 deaths and €9 billion in healthcare costs associated with the disease.

"Currently, only 14 percent of the EU population participates in colon cancer screening programs, due to inconvenient tools and insufficient education or awareness," said project coordinator Peter Andersen of the Technical University of Denmark (DTU) discussing the project's progress.

"With early intervention, we could do so much more, save more lives and reduce healthcare costs."

According to DTU, doctors can easily miss pre-cancerous growths when examining the bowel for polyps if the polyps are smaller than 10 millimeters in diameter or flat in appearance, and a 2017 study estimated than nearly 1 in 5 colorectal polyps were missed during colonoscopies.

Optical techniques offer the prospect of higher sensitivity and specificity compared to current colonoscopy methods, improving point-of-care management and early diagnosis of colorectal cancer. Their use could raise specificity and sensitivity rates above 90 percent.

"Advancing the combat against cancer by earlier detection of lesions relies on ongoing and reinforced continued research in lasers and photonics across Europe, results that translate into further improvement of diagnostic capabilities," commented Andersen.

Crucial step in tackling this disease

OCT exceeds the other techniques in terms of speed, field of view and penetration depth, and its sensitivity to changes in the refractive index is an ideal candidate to visualize textures and structural features of tissue.

PROSCOPE will exploit the same synergies for the study of bowel tissues, according to Peter Andersen, who drew an analogy with being able to zoom into an image on Google Earth.

"Our imaging procedure starts with conventional white light to identify a suspicious area that a clinician would like to inspect further," he commented. "Next, we can zoom into the depth of the lesion using first OCT, then multi-photon microscopy for metabolic information, and finally Raman spectroscopy for molecular information - almost a molecular fingerprint of cancerous cells - to assess the suspected lesion."

The project intends to conduct clinical trials at the Medical University of Vienna as part of its roadmap towards concluding its work in 2024.

"Our technology is, for the first time in colon inspections, an all-in-one device and, most importantly, label-free, meaning we do not have to inject a patient with dyes or biomarkers to flag up something suspicious," noted Andersen. "PROSCOPE is a crucial step in the journey to tackling this disease."