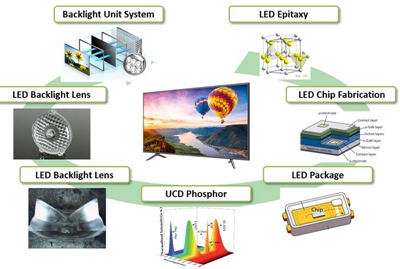 Filed in the US District Court for the Eastern District of Texas, together with affiliate Seoul Viosys, the legal paperwork alleges that Fry’s is selling LED TVs that infringe no fewer than 15 of its patents relating to LED backlight units in LCD TVs.

Uniform light distribution
While some of those patents relate to semiconductor layer structures in the LED chips, Seoul Semiconductor has drawn particular attention to an optical lens technology that generates uniform light distribution and is used in TVs and PC monitor backlights – describing it as “one of the most significant LED backlight technologies” since the earliest days of LCD backlights.

That technology appears to relate to US patent 7,618,162, entitled “Irradiance-redistribution lens and its applications to LED downlights”. Originally filed by US firm InteLED back in 2005, it describes how square-cut sections of the optical components can be arrayed laterally to form a downlight delivering a uniform rectangular spot.

In count six of the lawsuit, Seoul asserts that Fry’s is infringing this patent by virtue of importing to the US and selling a specific RCA LED TV. The filed court documents show images of one of the RCA model “LED55C55R120Q” TVs - originally launched in January 2013 - with the LCD panel removed, revealing a 108-LED backlight and close-ups of associated lenses.

“The lens comprises a solid of revolution about a central axis of the lens,” states the document. “The lens includes a central cavity within which the light-emitting device is provided. The surface of the central cavity comprises a light entry surface for light emitted from the LED. The upper and side surfaces comprise a light exit surface configured to radiate the light received by the light entrance surface into a diverging output beam.”

The document continues: “The profile of the light entry surface results in refraction of the entering light, which results in light incident at the light exit surface having a predominantly uniform irradiance.”

Royalties
It isn’t the first time that Seoul has instructed its lawyers to sue over the optical technology – although bringing the suit against an electronics retailer is an unusual move.

Back in 2016, Seoul says that it won a case in the US federal court against the Japanese lens maker Enplas, with the judgment finding wilful infringement of two Seoul patents – one relating to the LED backlight lens, and another relating to the optical system.

“Over the past few years, Seoul has also pursued patent litigation for infringement of LED backlight lens and other components patents against North America TV maker Craig Electronics and Curtis International and successfully obtained patent royalties from both companies,” says the firm.

Prior to filing its latest litigation, Seoul said it delivered notices of patent infringement to various global TV brand makers, as well as a variety of TV modules and set manufacturers across Asia who actually produce the hardware.

“Seoul advised these TV makers and manufacturers that they needed to stop using LEDs and/or other components that likely infringe Seoul’s LED backlight lens and UCD technology patents,” it said, with its VP of IT Business Sam Ryu adding:

“For young entrepreneurs and small business entities to develop innovative products under fair competition culture, it is necessary for market participants to respect other companies’ intellectual property rights.

“To prevent distribution of suspected infringing products, we are thoroughly investigating various global TV brand products that may infringe our patents. If these companies continue to use products that are suspected of infringement, despite our requests to stop, we will take all the necessary legal actions to the end.”

In its lawsuit, Seoul says that it wants declarations that Fry’s has infringed the 15 patents in question, as well as damages, and is demanding a jury trial.