ANU (Australia) -developed system is based on nano-structures forming a metasurface, which controls photon behavior. 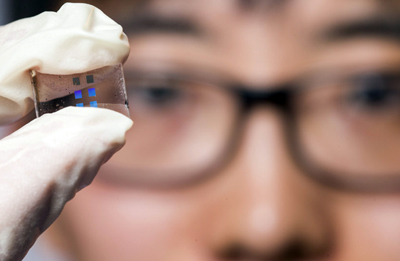 Kai Wang with a sample that has multiple metasurface camera lenses.

An international team of researchers led by the Australian National University (ANU), Canberra, has invented a tiny camera lens, which they say could lead to a device to connect future quantum computers to an optical fiber network.

The development is described in Science. A key conclusion in the Science article’s abstract is that this camera “illustrates the feasibility of ultrathin quantum metadevices for the manipulation and measurement of multiphoton quantum states, with applications in free-space quantum imaging and communications.”

The team says that the camera’s unconventional lens, which measures approximately 1μm across, “could enable a fast and reliable transfer of quantum information from a future quantum computer to optical networks, once these technologies are fully realized.”

The device comprises a silicon film with millions of nano-structures forming a metasurface, which can control light with functionalities that are said to “outperform traditional systems”. Associate Professor Andrey Sukhorukov commented, “the metasurface camera lens is highly transparent, thereby enabling efficient transmission and detection of information encoded in quantum light.

"It is the first of its kind to image several quantum particles of light at once, enabling the observation of their spooky behaviour with ultra-sensitive cameras."

Prof Sukhorukov led the research with a team of scientists at the Nonlinear Physics Centre of the ANU Research School of Physics and Engineering.

Kai Wang, a PhD scholar at the Nonlinear Physics Centre who worked on all aspects of the project, said one challenge was making portable quantum technologies. "Our device offers a compact, integrated and stable solution for manipulating quantum light. It is fabricated with a similar kind of manufacturing technique used by Intel and NVIDIA for computer chips," he said.

The research was conducted at the Nonlinear Physics Centre laboratories, where staff and postgraduate scholars developed and trialled the metasurface camera lens in collaboration with researchers at the Oak Ridge National Laboratory in the United States and the National Central University in Taiwan.