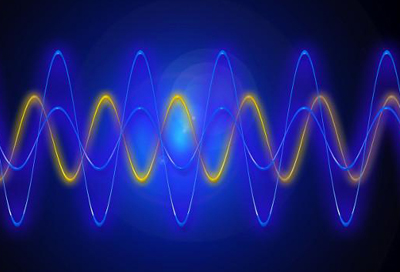 Lasers are commonly used as high power sources that reliably operate at a specific frequency. But how does this frequency get selected when a laser is turned on, and how quickly does this consistent transmission effect occur?

Engineers using terahertz frequency technology have started to answer these questions, having investigated this process for the first time. Their results, just published in Nature Communications, will “underpin the future development of semiconductor lasers, including those used in telecommunications systems.”

It has long been predicted that operating frequencies within semiconductor lasers stabilize on a timescale of a few nanoseconds and can be altered within a few hundreds of picoseconds.Until now though, no detector has been capable of measuring and proving this precisely, and the best results have only been achieved on nanosecond timescales, which are too slow to allow efficient analysis or to be used to develop the most effective new systems.

The terahertz-powered technology can measure the wavelength of light in periods of femtoseconds, giving unprecedented levels of detail. By knowing the speed at which wavelengths change within lasers, and what happens during that process within miniscule time frames, more efficient devices and systems can be built.

“Our research is aimed at showing engineers and developers where to look to drive increased performance in their own systems,” commented Professor Edmund Linfield, Chair of Terahertz Electronics at the University of Leeds. The Leeds components of the study were carried out in the university’s Terahertz Photonics Laboratory, part of the Bragg Centre for Materials Research.

Dr Iman Kundu, from Leeds’ School of Electronic and Electrical Engineering, is principal author of the paper explaining the research. He commented, “Now that we can see the detailed emission of the lasers over such incredibly small time frames, we can see how the wavelength of light changes as one moves from one steady state to a new steady state.

“Terahertz technology is not available to many sectors, but we believe its value lies in being able to highlight trends and explain the detailed operation of integrated photonic devices, which are used in complex imaging systems which might be found in the pharmaceutical or electronics sectors.”

Professor Linfield, who was also involved in the study, commented, “We’re using the highly advanced capabilities of terahertz technology to shine a light on the operation of lasers. Our research is aimed at showing engineers and developers where to look to drive increased performance in their own systems. By doing this, we will increase the global competitiveness of the UK’s science and engineering base.” 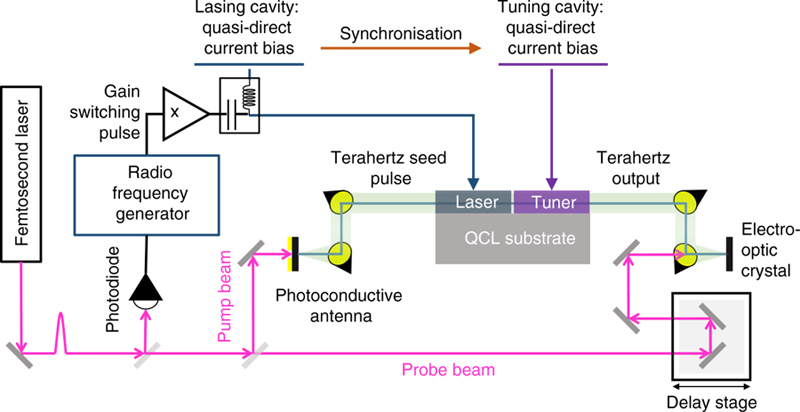 Experimental arrangement used for injection seeding of the coupled-cavity laser.

The discussion section of the Nature Communications paper states, “[Our] observations are qualitatively applicable to any multi-cavity frequency-tunable laser, such as lasers with sampled grating distributed Bragg reflectors, where frequency selection is determined by comb alignment.

“The results suggest that for any frequency-tuneable laser based on Vernier selection, where switching speeds are important, the variation of switch-on time should be considered. For example, when fast switching between emission frequencies is required, care should be taken to design the laser cavity such that regimes of intermediate comb alignment are avoided.

“In conclusion, we report dynamic hopping between lasing modes and the temporal evolution of a transient multi-mode emission into a steady-state single mode emission in a coupled-cavity QCL. We also found that, whereas hopping between single modes can be achieved through a small change in tuning current, the stabilisation time in such lasers is more sensitive to the alignment between the frequency combs supported by each cavity section.”