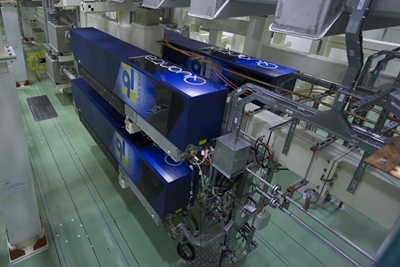 Lumibird, the recently rebranded combination of French photonics firms Quantel and Keopsys, is confident of hitting its €100 million sales target for this year, thanks partly to strong demand for fiber lasers now coming off its new production lines.

The Paris-listed company has just announced half-yearly revenues of €42.3 million, up 4.5 per cent on the same period in 2017. Second-quarter sales of €24.4 million were up nearly 13 per cent on the first three months of this year – indicating a solid recovery from that weak start.

Those figures also suggest that CEO Marc Le Flohic and his executive team are expecting a significant ramp in sales in the second half of this year. That should be delivered in part by increased production of fiber lasers for use in lidar sensors for autonomous vehicle applications, while Lumibird said the sourcing delays that have impacted its industrial and scientific laser sales have now been resolved.

“In an environment marked by a strong level of orders and new markets opening up, the benefits of work carried out to increase production capacity started to be seen in the second quarter, enabling the group to confirm its full-year revenue target of €100 million for 2018,” announced Lumibird.

That optimism was bolstered further last month, when the company revealed that it had won a further €20 million contract to deliver more lasers for the giant Laser Mégajoule (LMJ) fusion project – France’s equivalent to the National Ignition Facility in California.

They include new COO Alan Boyd, who previously worked in the same role at Denmark’s NKT Photonics before setting up as a consultant and advising Keopsys prior to the Quantel merger.

At €6 million, Lumibird’s lidar-related sales in the first half of 2018 were up strongly from €4.2 million in the first six months of 2017. And that total looks set to grow quickly from now on.

“For its major clients, the group has validated the effectiveness of its fiber lasers for autonomous vehicle applications, from the pilot phase through to delivery of the first series, which are expected to be ramped up over the second half of the year,” announced the company.

But for now Lumibird’s group sales remain dominated by applications in the more traditional scientific, medical, and industrial sectors. At €15.7 million, the medical division’s revenues were virtually flat compared with last year, while industrial and scientific sales in the first half are down 4 per cent on 2017, at €14.6 million.

Following the latest financial release, Lumibird’s stock slipped back slightly on the Paris exchange. In early trading on July 24, its shares were worth just over €13 – equivalent to a market capitalization of around €210 million.