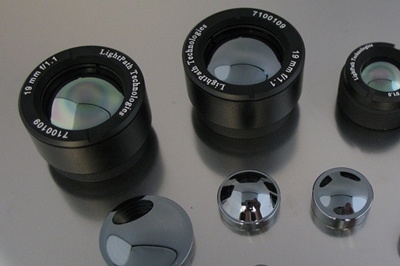 Last week the Orlando company said that it had agreed a $1 million contract for two custom-designed infrared imaging lenses, from a new client described by LightPath as “a major American thermal imaging camera manufacturer”.

“This contract is with a new customer for LightPath which is active in the commercial, firefighting, law enforcement and outdoor sports markets,” added the firm, without specifying the customer directly.

Black Diamond production
The technology involved is based around LightPath’s “Black Diamond 6” (BD6) chalcogenide glass lenses, with LightPath says is gaining more acceptance from optical engineers at a time when the cost of germanium - widely used in thermal imaging optics - is rising.

LightPath’s CEO Jim Gaynor said in a release announcing the million-dollar deal: “LightPath was selected by the customer after an evaluation of suppliers based on high-quality volume manufacturing capabilities, optical design strength and cost competitiveness for an optimized value proposition.

“We are confident that recent investments in our production capacity and sales and marketing initiatives are delivering their intended results.”

The company also referenced a recent market report from Maxtech International suggesting that the number of uncooled infrared imaging detectors rose by more than 30 per cent last year, to some 1.3 million units.

However, the price of key components remains a major challenge for manufacturers, with LightPath saying that its approach offers a combination of lower costs and improved functionality.

News of the thermal imaging purchase order came just two days after the Orlando firm had revealed a $600,000 deal from a major manufacturer of commercial video surveillance equipment in Asia.

That agreement also centers on LightPath’s BD6-based infrared lenses, and will be filled over the coming year.

“This large order for a new product from our recently launched BD6 product line reflects our ability to provide high-volume manufacturing of high-performance infrared optical assemblies at an excellent value to our customers,” remarked Gaynor, adding that the deal indicated the effectiveness of LightPath’s vertical integration strategy.

LightPath also received a $550,000 purchase order for what it says is a “large quantity” of 19 mm thermal imaging assemblies, placed by an infrared optics OEM in the US.

Diverse offerings
Around a decade ago, the company made a significant strategic decision to switch from high-cost, low-volume applications and become a provider of high-volume, low-cost optical components - and to reduce the cost of infrared optics by at least 35 per cent.

Gaynor said that LightPath was now witnessing “incredible interest” in its infrared capabilities, particularly in regard to the chalcogenide-based BD6 lenses.

“As we experience the worldwide emergence of a broad number of applications for infrared and visible light applications, we believe few other industrial technology companies can rival our diverse product offerings in terms of our production capacity, engineering quality and cost,” the CEO claimed.

“Our vertical integration, including the ability to internally melt our own chalcogenide glass for enhanced supply chain management, provides both pricing and margin benefits for LightPath, which enables us to address opportunities for new and existing customers and profitability improvements for our shareholders.”

The BD6 material, now being produced in volume at LightPath’s Orlando facility, can be both molded and fabricated into optical elements via precision diamond turning – making it suitable for both low-cost and some high-end applications.

Gaynor says that the capability means LightPath can make lenses of virtually any size, while the company can also take advantage of its other production sites in Latvia and China.

In its most recent financial quarter, the company posted a small operating profit on flat sales of $8.5 million. However, Gaynor said that bookings of $9.2 million were up 50 per cent year-on-year.

Over the past 12 months, capital expenditure of around $2.5 million is said to have increased LightPath’s production capacity by approximately 60 per cent.