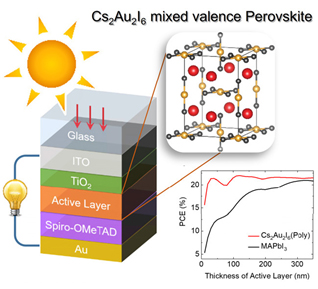 A research team at Korea Advanced Institute of Science and Technology (KAIST) has proposed a new perovskite material – Cs2Au2I6 – that serves as a potential active material for highly efficient, lead-free thin-film photovoltaic devices. The developers say that this material is expected to lay the foundation to overcome previously known limitations of perovskite including problematic stability and toxicity issues.

However, it has been noted that conventional organic-inorganic hybrid perovskite materials exhibit low stability, eventually degrading their performance and making them unfit for continued use. Moreover, their inclusion of lead has undermined their environmental friendliness.

The scientists led by Professor Hyungjun Kim from the KAIST Department of Chemistry and Professor Min Seok Jang from the School of Electrical Engineering has analyzed a previously discovered perovskite material, Cs2Au2I6, consisting of only inorganic substances and investigated its suitability for application in thin-film photovoltaic devices. 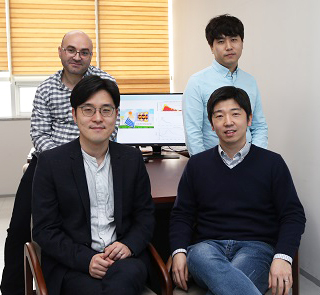 Theoretical investigations suggests that this new perovskite material is not only as efficient but also more stable and environment friendly compared to the conventional perovskite materials. For this analysis, the team developed multiscale multiphysics simulation frameworks.

Atomic-scale first-principle quantum calculations were carried out to study the optical properties of the proposed material, and device-scale electromagnetic simulations were conducted to suggest that the material could indeed serve as a promising photovoltaic substance at the device level.

From this point onward, the research team plans to extend the study in two directions: an empirical study to apply the perovskite material in real-world photovoltaic cells and a theoretical analysis to find the optimal and highly stable material for photovoltaic cells.

Professor Hyungjun commented, “Perovskite materials are highly efficient, but in order to completely replace the conventional solar cells, their stability and toxicity issues must first be resolved. This research is expected to accelerate related studies in pursuit of high-efficiency, environment-friendly perovskite materials.”