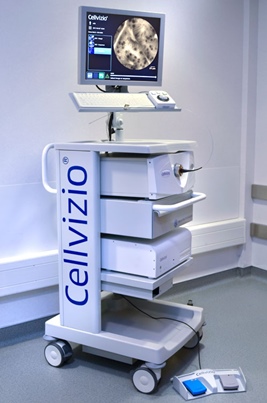 Paris-based Mauna Kea Technologies, whose “Cellvizio” confocal laser endomicroscopy (CLE) platform is used in a variety of surgical applications, says that the photonics technology has now received clearance in the US for use in neurosurgery.

Describing the Food & Drug Administration (FDA) decision as a “pivotal regulatory milestone” for the technique, Mauna Kea said it would provide a unique capability for as-yet unmet needs during brain and spinal procedures.

For the emerging application area, Mauna Kea has developed a new confocal miniprobe called the “CranioFlex”, which is based on its series F400 and F800 instruments.

The development follows a trial of the optical biopsy technology at a neurosurgery clinic in Cologne, Germany. The surgical team that tested Cellvizio during that trial wrote in a subsequent paper that CLE had “revolutionary potential”, and the ability to provide immediate diagnosis without the need for frozen sections that demand time-consuming analysis in a pathology lab.

“The Cellvizio 100 with the CranioFlex provides imaging of tissue microstructures and allows the identification of cells and vessels and their organization within the central nervous system during cranial diagnostic and therapeutic procedures such as tumor biopsy and resection,” announced Mauna Kea following the FDA decision.

The company also explained that the series F400 model operates at 488 nm, and the F800 model at 800 nm - said to be two highly relevant wavelengths, commonly used during brain surgery for imaging and navigation.

‘New era’ in neurosurgery
Company founder and CEO Sacha Loiseau, previously an astrophysicist at NASA’s Jet Propulsion Laboratory, added in company release: “This is an important regulatory and business milestone, opening new avenues for market development and strategic partnerships. It also unlocks a new era in neurosurgery, paving the way toward more precise resection of brain and spinal tumors.”

Loiseau claims that Cellvizio has become the first marketable endomicroscopic visualization platform for such applications, providing neurosurgeons with the ability to perform real-time optical biopsies for the first time. The equipment is designed to help them determine whether brain or spinal tumors have been excised completely during resection procedures.

“This clearance builds on many years of clinical development and is happening at a time when the neurosurgery community recognizes the potential benefits of real-time digital visualization of nervous system tissue microstructures,” added the CEO.

The company says that the decision represents the latest of 15 such regulatory clearances for Cellvizio received from the FDA. Existing applications of the technology have tended to focus on the gastrointestinal (GI) tract, although other trials have included pediatric heart surgery.