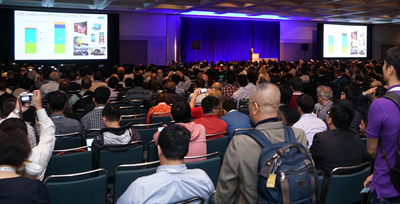 This week, the 55th edition of Display Week is being presented by the Society for Information Display (SID), at the Los Angeles Convention Center in California.

Here, optics.org reports on certain highlights from some of the show’s larger exhibitors.

Schott is unveiling its RealView system, which it describes as “a breakthrough in high-index glass wafers”. The glass development enables more immersive augmented reality applications, claims the specialist glass-making giant.

The new wafers are made from optical glass with a high refractive index, enabling a wider field of view in AR devices. The geometrical precision of the wafer surface enables what Schott calls “superior picture quality with the best contrast and highest definition, enhancing the user experience.” 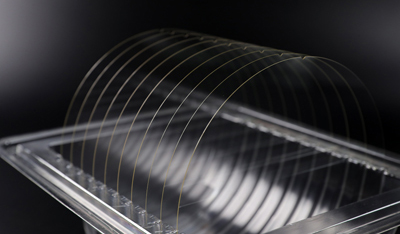 The company produces the raw glass in its high-tech melting facilities in Germany, and the wafer manufacturing and optical coating takes place in China, where Schott recently announced a joint venture investment together with Zhejiang Crystal-Optech.

“Augmented reality should still look like reality," said Dr. Rüdiger Sprengard, VP and Head of Augmented Reality. "To raise the bar and meet the requirements of this rapidly expanding market, manufacturers need superior optical wafers with qualities a full order of magnitude greater than what has previously appeared on the market."

“We are leveraging Corning’s core technologies and our manufacturing and engineering expertise to drive the next wave of display innovations,” said Chris Hudson, international division VP and commercial director. “Today, the display industry is witnessing a shift to the next generation of devices, and Corning is excited to be at the forefront of this continued evolution.” Corning’s booth #1029 features the following technologies:

Also during Display Week, experts from Corning were set to make presentations at the 2018 SID/DSCC Business Conference, the Display Week Symposium, and SID’s LCD 50th Anniversary Celebration (see below).

Hot on the heels of a $25 million Series C fundraising round, AR-VR solutions developer DigiLens is introducing a new waveguide eyeglass display for AR apps. The system is constructed from only two inkjet coated grating layers. The company states, “It's thinner, lighter, brighter, and significantly lower in cost.”

The DigiLens MonoHUD is intended for smart helmet applications now being developed across the industry. The MonoHUD provides motorcycle and bike riders with distraction-free content directly in their line of sight, so they can keep their eyes focused on the road ahead.

It enables variables such as speed, gear change, fuel and oil level status to be monitored, along with maps, real-time accident warnings, music and other non-distractive smartphone applications—all without riders needing to take their eyes off the road. In addition to the new two-layer display that replaces the previous three-layer design, DigiLens has started using a new inkjet coating manufacturing process with significantly increased throughput. 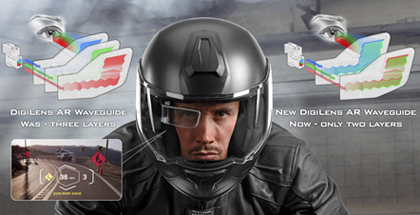 "The increased quality of the two-layer display and the reduction in manufacturing complexity is crucial for our customers," said DigiLens CEO Chris Pickett. "It lowers the production costs and allows them to get product to market quicker. We are already seeing several innovative use cases like motorcycle HUDs and are seeking developers to show us what's next."

Young Optics, a leading display manufacturer, is one of the first to license the DigiLens MonoHUD, and will soon be supplying it at high volume. Sena, an industry leader in Bluetooth communications for motorcycle and action sports, is working with Young Optics to integrate the DigiLens display and its communication system into helmets to allow riders to view their phone and dash information through the display.

Display Week organizer Society for Information Display announced that this year’s event would have a special event celebrating 50 years of the liquid crystal display. A SID release stated, “LCDs are currently a US$100-plus billion industry, ubiquitous in everyday products such as TVs, smartphones and computer monitors, and being designed into indoor signage and AR/VR systems – to name a few.”

On Tuesday afternoon, May 22nd, SID hosted an exclusive event entitled "Pioneering the Trail to Today: 50 Years of LCD Innovations", featuring brief talks from industry leaders illuminating the past, present and exciting future of LCD technology.