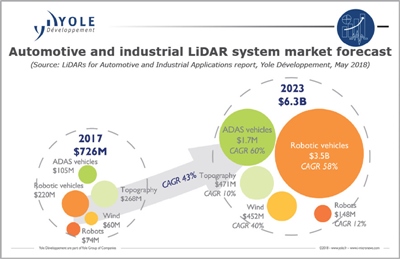 Lidar market forecast: in and out of cars (click to enlarge)

The global market for lidar systems in automotive applications is set to explode over the next few years, reaching $5 billion by 2023.

That is one of the main conclusions from a pair of analyst reports just published by French market research firm Yole Développement, covering lidar applications and the related patent landscape.

It also comes despite electric vehicle disruptor Tesla and the Chinese autonomous truck firm TuSimple both indicating that they do not intend to use lidar in their vehicles. While the various radar, camera, thermal vision, and map-based approaches present a tough competitive environment for lidar in automotive, Yole's take is that "redundancy and complementarity" between the plethora of sensors will be mandatory for self-driving vehicles to reach their potential.

Market horizon
Though automotive lidar applications commanded a market worth less than $1 billion in 2017, the recent proliferation of venture investment in dozens of companies with a slew of different approaches to the technology indicates the high level of interest among auto companies who see lidar as a key element of future autonomous vehicles - as well as advanced driver assistance systems (ADAS) in the nearer-term.

Extending that horizon out 15 years, Yole analyst Alexis Debray is predicting that the market for automotive lidar systems will grow to a colossal $28 billion by 2032.

He estimates that upwards of $800 million has been invested in lidar technolopgy developers over the past two years – and highlights the particularly large sums attracted by early movers Quanergy Systems and Velodyne Lidar.

“Such investments testify to lidar technologies’ immaturity,” reports the Yole team. “Startups, industrial players, Tier1s, and automotive OEMs are all investing in different approaches with no guarantee of success - but this is the price they must pay for a chance to be part of the automotive-grade market for lidar technologies, seen by many as the ‘holy grail’.”

Another of the Yole report’s key findings is the sheer diversity of developmental technologies – something also reflected in Knowmade’s assessment of related intellectual property (IP).

“Most current products, such as those proposed by Velodyne, use a macro-mechanical scanning of laser beams at wavelengths between 830 and 940 nm,” reports the team. “However, MEMS scanners are expected to be the next evolution of automotive lidar, promising to be smaller and cheaper.”

The anticipated next step after that is the optical phased-array, as proposed by Quanergy among others, with the advantage of featuring no moving parts.

“This technology stems from optical fiber communications,” states Yole. “Some players like Continental and Xenomatix propose flash lidar, in which the whole scene is illuminated simultaneously with no moving part. Other players propose different solutions: Cepton and Luminar have revealed mechanical scanning technologies, while Neptec employs Risley prisms.” 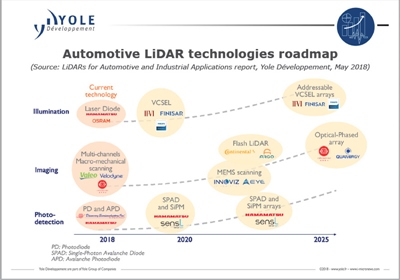 1550 nm advantages
Another critical differentiator is the wavelength of light employed: although many developers use near-infrared light sources at 830-940 nm because the corresponding emitter and detector components are widely available, others are working at 1550 nm. That is partly because eye safety rules permit much higher (x100) laser powers, but also because dust robustness is better. “These players include Blackmore, Neptec, AEye, and Luminar,” reports Yole.

The temporal realm presents another point of diversity. Most lidar developers use pulsed lidar to deliver time-of-flight data for ranging of objects in the road, but some are investigating continuous-wave methods that allow for heterodyne detection, and better sensitivity.

On the patent front, Paul Leclaire from Knowmade discovered that Japanese companies dominate the landscape: Denso, Mitsubishi, Nissan, and Toyota all feature among the top-five patent assignees, although they are increasingly being challenged by a range of electronics, materials, and embedded system providers – including startups.

“Lidar-related patent activity began in the late 1980s amongst Japanese automotive players,” reports Knowmade. “This first wave of IP players, composed of Japanese and European car manufacturers and suppliers, contributed to the development of lidar for ADAS applications.”

Since 2010, however, that landscape has seen a strong increase, with the Knowmade team saying that the swift development of autonomous vehicles has opened many opportunities, and a variety of newcomers challenging the established IP holders.

• The Yole Développement and Knowmade reports are available now.