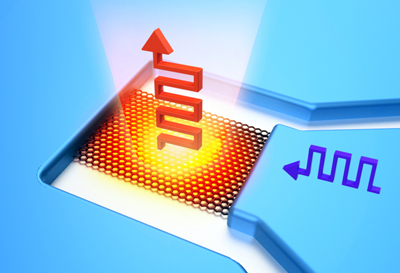 Schematic of a graphene-based emitter.

High-speed light emitters integrated on silicon chips can support new architectures for silicon-based optoelectronics. But so far, compound-semiconductor-based light emitters have presented significant challenges to their integration with a silicon-based platform because of the difficulty of their direct fabrication on a silicon substrate.

As a two-dimensional nanocarbon material, graphene offers special and unique capabilities in terms of its electronic, optical and thermal properties, which can be applied for optoelectronic devices. Graphene-based blackbody emitters are also promising light emitters on silicon chip in the NIR and mid-infrared region.

An integrated, high-speed and on-chip blackbody emitter based on graphene in the NIR region including telecommunications wavelengths has been demonstrated. A fast response time of ~100 ps, which is ~105 higher than the previous graphene emitters, has been experimentally demonstrated for single and few-layer graphene; the emission responses can be controlled by the graphene contact with the substrate depending on the number of graphene layers.

The mechanisms of the high-speed emission have been elucidated by performing theoretical calculations of the heat conduction equations considering the thermal model of emitters including graphene and a substrate. The simulated results indicate that the fast response properties can be understood not only by the classical thermal transport of in-plane heat conduction in graphene and heat dissipation to the substrate but also by the remote quantum thermal transport via the surface polar phonons (SPoPhs) of the substrates.

The researchers reported, "We have fabricated integrated two-dimensional array emitters with large-scale graphene grown by chemical vapour deposition method and capped emitters operable in air, and carried out the direct coupling of optical fibers to the emitters owing to their small footprint and planar device structure."

Graphene light emitters offer great advantageous over conventional compound semiconductor emitters because they can be highly integrated on silicon chip due to simple fabrication processes of graphene emitters and direct coupling with silicon waveguide through an evanescent field. Because graphene can realize high-speed, small footprint and on-Si-chip light emitters, which are still challenges for compound semiconductors, the graphene-based light emitters can open new routes to highly integrated optoelectronics and silicon photonics.

The Nature Communciations article concludes, “We [have] demonstrated real-time optical communications, integrated two-dimensional array emitters, capped emitters operable in air, and the direct coupling of optical fibers to the emitters. These emitters can open new routes to on-Si-chip, small footprint, and high-speed emitters for highly integrated optoelectronics and silicon photonics.”