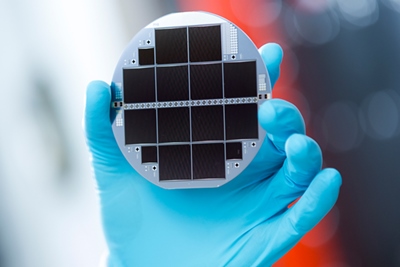 Researchers at the Fraunhofer Institute for Solar Energy Systems (ISE) in Freiburg have set a new efficiency record for a hybrid solar cell based on silicon and compound semiconductor materials.

Their triple-junction device, reported in the latest issue of the journal Nature Energy, converted exactly one-third of the solar energy it received into electrical energy – improving on the previous best of 31.3 per cent, set a year ago.

The latest figure compares with 27 per cent for the most efficient silicon cells, and 46 per cent for the best multi-junction performance (see NREL's latest chart of record-breaking solar cells), although the latter figure refers to a quadruple-junction cell and concentrated sunlight.

In their paper, they report that the key issues of III–V/silicon interface recombination and silicon's weak absorption are addressed using polysilicon/SiOx passivating contacts, and a novel rear-side diffraction grating for the silicon bottom cell.

“The atoms on the surface of the III-V sub-cell form bonds with the silicon atoms, creating a monolithic device,” they explain. “The complexity of its inner structure is not evident from its outer appearance: the cell has a simple front and rear contact just as a conventional silicon solar cell and therefore can be integrated into photovoltaic modules in the same manner.”

The three stacked junctions, or sub-cells, that make up the overall device combine to absorb solar radiation between the wavelengths of 300 nm and 1180 nm. Those sub-cells are connected by tunnel diodes, with a front-side contact grid and an antireflective coating also applied, to maximize the overall efficiency performance.

Cost reduction still needed
While the use of silicon - found in 90 per cent of commercial solar modules - suggests a route to reducing the cost of high-performance solar cells, the ISE researchers admit that there is still a long way to go before the hybrid design is suitable for any widespread deployment.

“On the way to the industrial manufacturing of III-V/silicon multi-junction solar cells, the costs of the III-V epitaxy and the connecting technology with silicon must be reduced,” they state, adding that there are still “great challenges” to overcome in achieving that aim.

Those challenges will continue to be tackled in Freiburg in the future, where the new Center for High Efficiency Solar Cells is currently under construction and should be completed next year.

“The ultimate objective is to make high-efficiency solar PV modules with efficiencies of over 30 per cent possible in the future,” concludes the team.