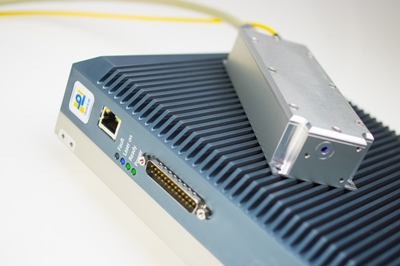 French laser firm Quantel is hopeful of posting sales in excess of €100 million this year – a figure that would represent an increase of around 18 per cent on the €85 million recorded in 2017.

The Paris-listed business, which completed its merger with compatriot Keopsys in late 2017, also confirmed that its annual revenues had risen 6 per cent between 2016 and 2017, thanks in part to ramping demand for its laser diodes, and a “strong acceleration” in the lidar sensors business.

CEO Marc Le Flohic and his executive team also revealed that the company’s pro-forma net income rose sharply to €4.3 million in 2017 – up from €2.4 million in the previous year.

Defense rebound
While defense-related sales sank nearly 18 per cent to €10.4 million in 2017, this part of the business is expected to rebound this year – partly as a result of the timing of existing contracts, but with some new deals apparently in the pipeline.

Late last year the company signed a 12-year contract worth a total of €6 million, to provide an illumination and targeting system for a major French defense contractor. The system, developed by Keopsys, is being integrated within a gyroscope for both defense and civil applications.

The emergence of lidar as a key technology for autonomous vehicles should provide an additional shot in the arm. Quantel stated that its lidar sensors division was forecasting strong growth, and expecting its first “major orders” following successful pilot tests carried out in the driverless vehicle sector.

Last year, lidar sensors accounted for €10.7 million in sales, following substantial investment and demand for wind turbine site assessments as well as automotive applications. Keopsys has claimed previously that its “KULT” series of products (short for Keopsys Ultra-compact Laser Transmitter) is the “world’s most used” laser in 3D scanning applications.

The series of products operates at a variety of wavelengths in the visible and near-infrared range, and includes pulsed laser transmitters based around thulium-, ytterbium-, and erbium-doped optical fiber.

Restructuring in progress
Further growth is also anticipated from its significant medical division this year. The medical business reported 15 per cent sales growth, to €31.7 million, in 2017, with Keopsys-Quantel highlighting that unit sales of its new yellow-emitting “Easyret” ophthalmology lasers had tripled to 100 systems.

Meanwhile, the newly merged business is in the midst of a restructuring effort that will see the sales teams from the previously separate companies combined, and the organization “optimized” across four sites.

The company has also set up a new subsidiary in Poland, from where marketing efforts aimed at central and eastern Europe will now be co-ordinated, is opening a sales office in China, and looking to expand its Japanese subsidiary.

In an investor presentation, Keopsys-Quantel reported that 26 per cent of its 2017 sales were to domestic customers in France, while the US accounted for 14 per cent of revenues, and China 12 per cent.

The same document highlights a wider strategy to “democratize” civil applications of lasers, with more deployments in automotive lidar, 3D mapping, and across a variety of medical disciplines. One potential new area is photoacoustic imaging, where Quantel researchers have developed compact but very powerful laser diodes that could be used in state-of-the-art diagnostic scanners.