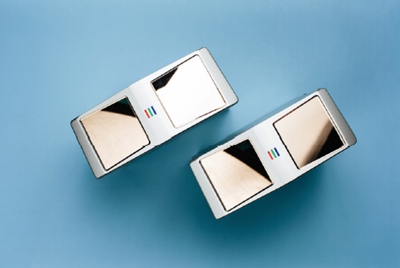 The venture-backed US firm, which emerged from stealth mode almost exactly a year ago with a series A funding round worth $36 million, now employs 350 people across three sites.

The latest of those locations is in Colorado Springs, following Luminar’s acquisition of chip design firm Black Forest Engineering. It specializes in high-performance InGaAs receivers - used to detect the 1550 nm light around which the Luminar lidar systems are based.

Luminar claims that by the end of this year it will have sufficient scale to equip every autonomous vehicle currently under test globally. A recent expansion at its manufacturing complex in Orlando, Florida, will help raise its output capacity to 5000 units per quarter.

Company CTO Jason Eichenholz said in a company release: “Last year was all about proving out this new kind of lidar technology, and 2018 is all about scale.”

Better hardware
With self-driving technologies under the microscope following last month’s fatal collision involving an Uber autonomous vehicle in Tempe, Arizona, Luminar stresses the motivation behind its focus on lidar performance, rather than cost reduction.

The company’s young founder and CEO Austin Russell said: “The sensing is at the core of self-driving technology and we need orders of magnitude improvement if we’re going to reach anywhere near human levels of safety.”

He believes that there is no longer a question of whether there is a need for better hardware, adding: “It’s just a matter of how quickly a new platform can scale.”

The most recent of those was a Phase II project awarded via the Missile Defense Agency to develop a near-infrared FPA combining a large array format with a small pixel pitch. Stephen Gaalema, the project’s principal investigator, is also Black Forest’s long-time president. 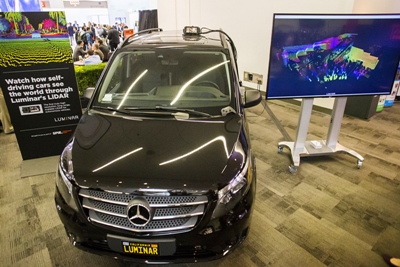 “The move brings the cost of [our] lidar receiver from what originally would have been tens of thousands to just $3,” Luminar stated.

The lidar company adds that the latest version of its sensor operates at just one-third of the size, weight, and power of its predecessor, and thanks to the investment in production capability can now be assembled in only eight minutes.

However, there appears to be no trade-off in terms of performance, in contrast to what Luminar describes as a “race to the bottom” among many of its competitors working on solid-state lidar units.

The key difference between Luminar and most other lidar sensor providers is in its use of 1550 nm lasers fabricated on indium phosphide (InP) semiconductor wafers.

While more expensive to produce than the 905 nm sources that feature in most automotive lidars, and which can be made on larger gallium arsenide (GaAs) material, the longer wavelength can take advantage of eye safety regulations to deliver far more power – leading to a much denser point-cloud of data from which information about the environment surrounding a vehicle can be generated.

200-meter range
One critical advantage claimed is the ability to sense low-reflectivity objects – for example black cars - at much greater distances, meaning that an autonomous car would have much more time to slow down or avoid hazards when traveling at high speed.

Among the company’s key partners is Toyota, whose US-based research institute (TRI) revealed that it was evaluating the technology last year. Luminar also showed off a Mercedes SUV featuring one of its sensor units during the SPIE Photonics West event in January 2018.

As well as hiring 30 engineers through the Black Forest acquisition, Luminar has brought on board former Motorola executive Jason Wojack, as its VP of hardware design. Wojack worked on the RAZR phone handset and Moto 360 watch in his previous roles.

• Luminar’s CTO Jason Eichenholz will discuss the requirements for self-driving vehicle lidar technology during a presentation at next week’s SPIE Defense and Commercial Security (DCS) event in Orlando, Florida. The talk is scheduled for 10.15am on Thursday April 19, at the exhibition floor’s industry stage.