Strengthens portfolio for security apps; also Osram has boosted the efficiency of green LEDs by 40%. 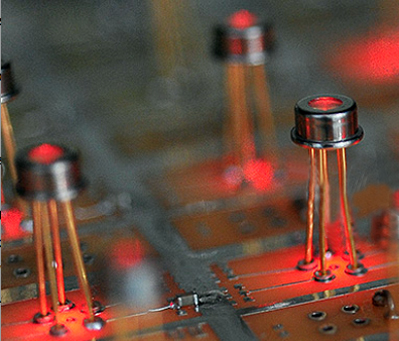 It's a deal: Osram has acquired US VCSEL specialist Vixar.

Osram has announced the acquisition of US-based VCSEL developer Vixar, a deal which the German photonics giant says will enhance its “expertise in semiconductor-based optical security technology.”

Osram added that it will now have a breadth of technological knowledge and an expanded product portfolio after bringing on board Vixar’s specialist capabilities in the field of VCSELs. While currently known primarily for identification applications in mobile devices, VCSEL also can be used to recognize gestures and measure distances in medical, industrial, and automotive applications.

Vixar was founded in 2005 and is based in Plymouth, Minnesota. Approximately 20 employees of the company will transfer to Osram as a result of the acquisition. Vixar is described as "profitable both on an operational and net results level". Closing of the transaction is expected in summer, 2018, and the parties are not disclosing financial details.

Olaf Berlien, CEO of Osram Licht AG, commented, “The acquisition of Vixar is adding to our expertise, particularly in the fast-growing market for security technologies. Osram is a technology leader in infrared optical semiconductors and has already succeeded in bringing to market light sources for fingerprint sensors, iris scanners, and 2D facial recognition.

"These newly-acquired capabilities will pave the way for further security technologies, including ultra-compact 3D facial recognition. In addition to unlocking smartphones and other consumer electronics devices, such technologies also can be used for high-security access controls in industry.”

The way in which VCSEL technology captures 3D environmental data has applications in gesture recognition, augmented reality, robotics and proximity sensors through to autonomous driving. Vixar is a fabless semiconductor company, and has developed a robust volume supply chain consisting of merchant foundries serving the optoelectronic market. Osram’s depth and breadth of semiconductor experience will further strengthen the manufacturing capabilities for the rapidly growing VCSEL market.

The significant drop in light output (aka the “green gap phenomenon”) exhibited by green LEDs has often been the cause of efficiency problems and high costs in customer applications. For its indium gallium nitride (InGaN)-based green LEDs, Osram OS has now succeeded in reducing significantly the typical forward voltages by around 600 mV. 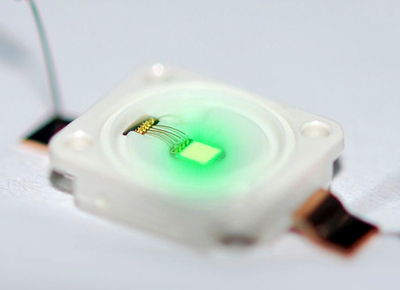 Installers can benefit from improvements in green LED efficiency.

In this week's second significant Osram announcement, the company commented, “With a simultaneous increase in optical output power, customers can benefit from improvements in efficiency of up to 40 percent compared to preceding products across the entire UX:3 portfolio from Osram.”

Following the modification, the typical forward voltages of green InGaN LEDs by are now 2.6 V at power densities of 45 A/cm2m. “The benefits are considerable,” said Osram OS, “particularly for applications in which red, blue and green LEDs are used in combination.”

Because all three colors now have a voltage of less than 3 V the drivers, which were previously designed for higher maximum voltages, can now be dimensioned smaller. This in turn reduces both dissipative power loss and costs.

“At 350 mA, 1 mm2 UX:3 chips achieve efficiencies of 175 lm/W and higher at wavelengths around 530 nm with the new technology. Absolute light output in excess of 300 lm at a pumping current of 1 A opens up new applications for customers.”

“Until recently, these efficiency values seemed unattainable for green direct emitting InGaN LEDs. We are now moving into areas that up to now have been achievable only with phosphor conversion emitters but with significantly reduced spectral quality.”