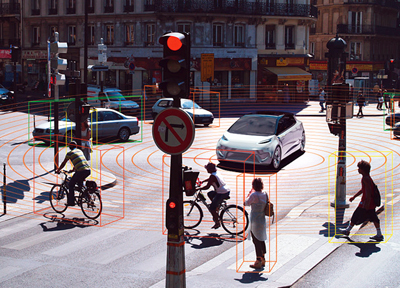 The shuttle will need to operate safely in a pedestrian-rich environment.

A technology company consortium comprising Osram Opto Semiconductors, Phantom Intelligence, Jungo Connectivity, and Vergence Automation are donating $100,000-worth of know-how and equipment to the University of Michigan-Dearborn, College of Engineering and Computer Science to support the development of an autonomous shuttle for the campus.

The shuttle project, known as MDAS.ai, was formally launched on Friday, April 27th, during the Michigan Robotics Day at the university.

The aim of the MDAS.ai is to create an self-driving shuttle for use in a low-speed, pedestrian-dense environment. This project is intended to help researchers, students and partners to better understand the complexities of autonomous driving and shared mobility in urban environments.

The partnership stressed that during development and trials the shuttle will use a human “safety” driver until fully tested.

The autonomous shuttle will be built completely in house by University of Michigan-Dearborn students and researchers, providing an opportunity to gain first-hand experience with next-generation automotive technologies.

Sridhar Lakshmanan, electrical and computer engineering professor at the university, explained, “With MDAS.ai, our talented students get to design, build and test innovative technologies that not only set them up for career success, but also help them directly influence how mobility advances and improves.”

Rajeev Thakur, regional marketing manager at Osram OS, commented, “Our lasers, IREDs and other automotive-qualified semiconductor devices support a variety of advanced driver assistance systems for this project, such as LiDAR and driver monitoring.”

Phantom will deliver two Flash LiDAR sensors, which operate in all weather conditions. Jungo will provide software for monitoring, including identification of driver, face and gaze detection. 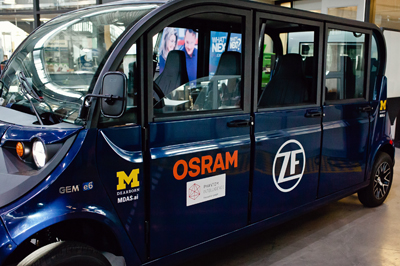 Vergence is providing a 4D long-range IR camera, which in its prototype design uses 190 Osram IR LEDs. In an interview with optics.org, Jamie Retterath, Chief Product Officer at Vergence Automation, gave further information about the specific development of the 4D Camera.

“The Michigan Shuttle will utilize a prototype version of the 4D Camera, which will be the first in a series of active cameras that will make their way into the AV market over the next 18 months,” he said.

Retterath added, “Lasers cannot handle the duty cycles and pulse widths required for active camera sensing. The introduction of an automotive grade LED from Osram with high output is a key enabler of the new wave of active camera systems. A version of the 4D Camera will be available in July that has the ability to image through fog.”