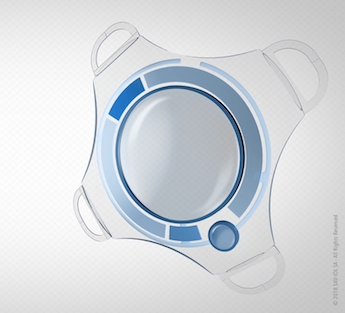 Intraocular lenses (IOLs), implanted in the eye as treatment for cataracts or myopia, are a growing global market in an ageing population, one estimated to be worth more than $4.5 billion by 2022.

Swiss Advanced Vision (SAV-IOL), a developer of IOLs designed for cataract surgery, has announced plans to develop a new class of lens that could potentially disrupt the IOL market and offer patients a more natural vision experience than existing lenses can provide.

SAV-IOL already markets a type of IOL with an extended depth of focus, or EDOF-IOL, in which an aspheric optical element in the center of the lens produces an elongated area of focus compared to conventional lenses. According to the company, the aspheric element turns the incident wavefront into a pseudo non-diffractive beam and enables a constant resolution and light intensity on the retina, leading to a higher level of comfort for the patient.

However, SAV-IOL itself has commented that there have been few recent innovations in the field of IOLs overall, despite the market size and opportunity, with the static design of all current lenses bringing inherent optical compromises in light distribution, resolution, and visual disturbance. In particular, IOLs lack an ability to provide the focusing reflex, termed accommodation, that natural crystalline lenses deliver.

The company's new development project aims to address these issues through an entirely novel approach to IOLs. It proposes an active lens with autofocus and wireless connectivity, termed Real-Time Autofocus Servo Control, or R-TASC.

The project is still at an early stage, with SAV-IOL aiming to raise CHF20 million over the next five years to move R-TASC towards market, but the company envisages a lens able to be fitted alongside an implanted monofocal lens for distance vision, or added to patients who already have a monofocal lens but want to restore their visual accommodation. The project could ultimately lead to an IOL platform able to incorporate augmented reality and other interactive or connected features.

Totally new in the ophthalmic field
"To our knowledge there is no current similar device under development," said Alexandre Pascarella, R&D director of SAV-IOL. "Most projects developing electro-active lenses concern external contact lenses, while most designs for prospective implantable devices describe solutions for the posterior chamber of the eye to replace the natural lens. The R-TASC device is intended to be placed in the eye's anterior chamber, sitting between the cornea and the iris, as a complement to the eye's natural lens rather than a replacement for it."

The active focusing function will require a power source and an energy gathering operation, both likely to be at the heart of SAV-IOL's forthcoming development project, and intended to allow focusing for any vision distance independently, solving the lack of accommodation reflex common to other IOLs.

"The main feature of the device is to change the lens focus function by autofocus means, therefore providing accommodation for the vision," commented Pascarella. "Some materials used in the device will be common to other intraocular lenses while some others required for the varifocal lens are more specific. But the proposed lens concept specifically dedicated to vision accommodation, its positioning, and its autofocus feature are totally new in the ophthalmic field."