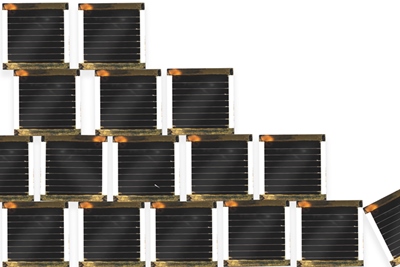 Researchers at some of Europe’s leading photovoltaics technology development institutions are to collaborate on a three-year project aiming to make perovskite-based solar cells and modules commercially viable.

Target performance
While solar perovskite materials have shown remarkable performance improvements in recent years, with their efficiencies already challenging that of far more established thin-film cell materials, questions over cost, stability, reliability, and maturity remain, and perovskite modules are yet to make any commercial breakthrough.

Under the “ESPResSo” project, the key aims include demonstrating a 35x35cm2 perovskite-based module architecture with an efficiency in excess of 17 per cent, and long-term (>20 years) reliable performance.

The current conversion efficiency record for a small-scale perovskite cell stands at 22.7 per cent, but that kind of performance is yet to be replicated at a size suitable for commercial deployment, or in a module format.

In addition, those state-of-the-art devices rely on expensive gold contacts and unstable hole-transport semiconductor materials made using methods not thought to be scalable to mass production.

Tom Aernouts, who leads the thin-film photovoltaics group at imec, observed: “Perovskite cells demonstrate clear potential to support [the] world’s energy demands cost-effectively. The ultimate aim of the partners of the ESPResSo project is to achieve this by bringing perovskite photovoltaics from the lab to the fab.”

A year ago, imec said that its 16 cm2 modules, developed under a separate project, had shown 12.4 per cent efficiency, with similar results from a Swiss effort co-ordinated by the Centre Suisse d’Electronique et de Microtechnique (CSEM).

Office façades
Under ESPResSo, Aernouts and his collaborators are targeting alternative materials, novel cell concepts and architectures, and advanced processing techniques to overcome the current limitations of perovskite technology.

“The consortium aims to bring the cell performance close to its theoretical limit by demonstrating cell efficiency of more than 24 per cent (on 1cm2) and less than 10 per cent degradation in cell efficiency following thermal stress at 85°C, 85 per cent RH [relative humidity] for over 1000 hours,” states the team.

The ESPResSo team also envisions integrating modules in façade elements, and demonstrating a levelized cost of electricity (LCoE) lower than €0.05 per kWh.

The partners add that prototyping advanced, arbitrary-shaped architectures with specific materials and process combinations will emphasize that new highly innovative applications – for example on flexible substrates, or with high semi-transparency - are possible.

Consortium partner Saule Technologies, which uses an inkjet-printing method to produce perovskite solar films, announced in January that it was working with Skanska with an aim of becoming the first partnership to cover office buildings with semi-transparent perovskite modules.

The company is aiming to get its production line up and running by the end of 2018, with initial modules expected to offer 10 per cent conversion efficiency at a cost of around $50 per square meter.