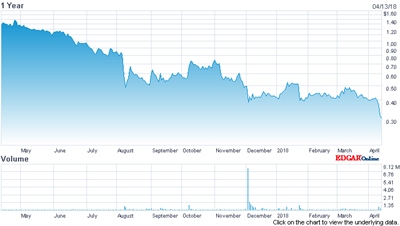 The CEO of the California-headquartered dental laser vendor Biolase has resigned, with the company announcing that is exploring “strategic alternatives” for the business.

Harold Flynn, who joined as CEO in July 2015, was said to have left the company to pursue other interests. Biolase CFO John Beaver has stepped up as interim CEO, with a focus on operational efficiencies while a range of options for the future of the business are explored.

Those alternatives could include licensing, joint-venture, or merger agreements, with company chairman Jonathan Lord overseeing the process.

Operating losses
Flynn, an experienced executive in the dental industry, became Biolase CEO in July 2015, when he took over from Jeffrey Nugent. Nugent had himself been in the lead executive position for only a year, after a boardroom coup had ousted the controversial previous incumbent, Federico Pignatelli.

Under Pignatelli, Biolase had found itself in dire straits financially, with Nugent and his team – and then Flynn - attempting to turn things around. However, Biolase has continued to struggle, and for 2017 posted an operating loss of $18 million on sales of $46.8 million, a rate of loss-making that has remained stubbornly consistent since Flynn’s appointment.

Biolase’s Nasdaq-listed stock has also taken a hit. Having traded below $1 for several months it has now received de-listing notices from the exchange.

As of December, the company listed $23 million in working capital on its balance sheet, thanks in large part to last year’s shareholder rights issue raising $11.4 million. Since then, Biolase has agreed a $6 million line of credit with Bridge Bank, with the cash from that set to be spent on an expansion in southern California intended to “transform” customer experiences.

“These initiatives are designed to increase awareness and education around dental lasers for both dentists and patients,” the firm said previously, with the promise of pain-free dentistry a key focus.

IPG development hook-up
In a statement announcing the departure of Flynn, Lord said: "I would like to thank Harold for the leadership and commitment he has demonstrated over the last three years. We are grateful for his contributions to product quality and for his steadfast dedication to Biolase. We thank him for his continued support and wish him all the best in this new phase of his professional career.”

Featuring high-power 980 nm and 940 nm diode emitters, the Epic Pro is aimed at soft-tissue applications, with Biolase claiming enhanced patient comfort and clinical outcomes. It gained US Food & Drug administration (FDA) clearance in early 2017, and is also cleared for use in Europe and the Middle East, and Asia, but sales have so far made little impact on the company's overall performance.