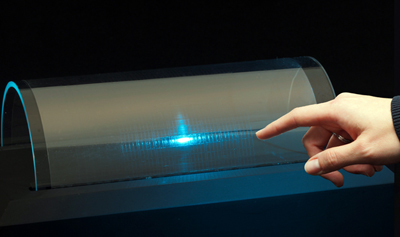 The transparent lines and patterns are obtained by inkjet printing or alternatively by direct gravure printing, which are electrically conductive even after bending. Thus, says the research center, “a one-step-printing process for cost-efficient electrode patterns is now enabled.”

In an announcement explaining that the organisation will be demonstrating its latest printable screen technology at the forthcoming Hannover Messe 2018 (stand B46 in Hall 2, April 24 to 27), INM adds, “Wearable technology is the new trend. New materials are being developed and devices adapted to yield the anatomical forms adopted by the users. It is no longer any secret that many big players in industry are working on flexible electronics.”

Conductive coatings with TCOs are usually applied by means of high vacuum techniques such as sputtering. For patterning of the TCO coatings additional cost-intensive process steps are necessary, for example photolithography and etching.

Peter William de Oliveira, Head of the INM’s Optical Materials Program Division, commented, “We produce TCO nanoparticles with special surface properties. The TCO ink is then created by adding a solvent and a special binder to these TCO particles.

“The binder performs several tasks here: it not only makes the TCO nanoparticles adhere well on the substrate; but it also increases the flexibility of the TCO coating: in this way, the conductivity is maintained even when the films are bent.

”Using an adapted electrode pattern, flexible capacitive touch screen sensors with high sensitivity and resolution is printed in a simple process.” After curing under UV light at low temperatures less than 130 degrees centigrade, the touch screen is completed.

Transparent, electronically conductive inks allow conductor tracks to be produced easily even on classic reel-to-reel processes. Initial trials at INM have been promising. The researchers all agree that in the future the use of structured rollers will allow structured, conductive surfaces to be printed with a high throughput at low cost.