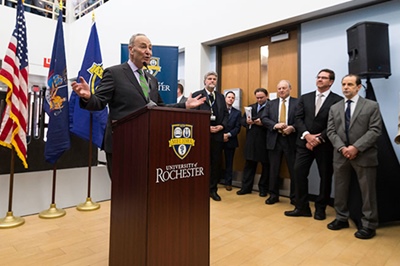 Charles "Chuck" Schumer, the US Senate Minority leader and Democrat senator for New York State, has published a three-point action plan that he vows will “vaporize” any budget cuts currently threatening the future of the Laboratory for Laser Energetics (LLE).

The University of Rochester facility – host to the high-energy Omega laser used for cutting-edge studies of inertial confinement fusion – is at risk after what LLE director Mike Campbell described as “potentially devastating” cuts that were revealed in the Department of Energy (DOE) response to the Trump administration’s wider budget request for fiscal year 2019.

“Let me be clear, I will work hard to vaporize any efforts to cut or eliminate Rochester’s Laser Lab,” Schumer announced during a visit to the laboratory. “Every time I visit the Rochester Laser Lab I am blown away by the ground-breaking work they are doing.”

Three-point plan
His three-pronged plan to “save” the laboratory includes: calling on Congress to include $75 million in federal funding for LLE in the fiscal 2018 budget; calling on the DOE to review and approve a new five-year co-operative agreement to work on nuclear stockpile stewardship activity; and an invitation for Lisa Gordon-Hagerty, the new US National Nuclear Security Administration (NNSA) chief, to tour LLE and see the Omega laser in action.

“Since ending underground nuclear testing, the only way to now get the information we need on our nuclear weapon stockpile’s performance, safety, and reliability is by doing specific test experiments,” added the Democrat leader.

“80 per cent of these test experiments are done at the Rochester Laser Lab. Especially at a time when countries like China and Russia are working to beat the US to new technological advances, the federal government should be doing more, not less, to put [LLE] to work for our nation’s energy and national security research needs. And on top of that, it draws the best and brightest to Rochester, deeply enriching the regional economy.”

Schumer highlighted how local companies like the high-speed imaging firm Sydor Technologies and optics polishing expert QED Technologies have spun out of LLE activity, creating jobs in a region that has suffered economically amid the demise of former giants like Eastman Kodak.

Bridging the gap
At present, the Senate’s version of the fiscal 2018 spending bill includes the $75 million allocation for LLE, while the House of Representatives’ version includes only $68 million.

The outlined five-year co-operative agreement would require DOE secretary Rick Perry to approve another $425 million of spending between fiscal years 2019 and 2023. The current five-year arrangement, which expires later this month, was for $345 million. Schumer is also seeking a short-term extension of the current agreement, to bridge the gap and avoid any closure of LLE before the 2019-2023 plan would kick in.

As well as the three-point plan and the visit to LLE, Schumer has written directly to both Gordon-Hagerty, who was appointed to the NNSA role just last month, and Perry.

To Gordon-Hagerty, he wrote: “I appreciated during your confirmation hearing testimony when you stated that among the DOE and NNSA’s unique responsibilities is to ensure the safety, security, and reliability of our nation’s nuclear weapons stockpile, and as such, one of your top priorities for achieving this mission will be to develop a skilled workforce to ensure that the nation’s “nuclear security enterprise continues to employ the brightest and the best by recruiting, retaining, and growing the highly skilled workforce needed to maintain the US nuclear weapons stockpile.”

“For the DOE and NNSA to excel on both these pursuits, look no further than the LLE. The LLE is vital to both enable the NNSA to meet this responsibility of ensuring our nuclear stockpile is safe and reliable, as well as to advance your priority of developing and educating the next generation workforce of scientists, engineers, and technicians that our nation needs.”

Global reach
He also pointed out that more than 360 scientists, engineers and technicians are currently involved directly at Omega, while the LLE-based National Laser User’s Facility brings more than 400 scientists to Rochester from around the world every year to carry out fundamental research, training and education.

In his message to DOE secretary Perry, Schumer asked for the current co-operative agreement to be extended until the end of September, allowing time for the hoped-for next deal to be arranged.

“The LLE is the largest DOE and NNSA funded university-based research center in the nation and the LLE’s Omega lasers are the largest and most capable at any academic institution in the US and worldwide,” he added. “It is the only fusion research program jointly supported by the federal government, the State of New York, industry, utilities, and a research university.”