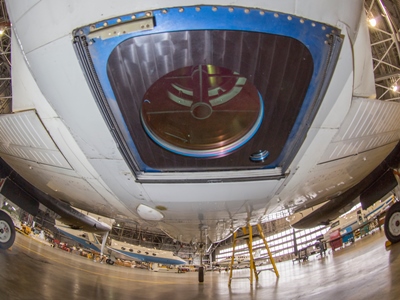 A team from NASA’s Langley Research Center in Virginia has carried out a series of test flights with state-of-the-art photonics equipment, to measure concentrations of the two most significant greenhouse gases in the atmosphere.

The new kit comprises a triple-pulse integrated path differential (IPDA) lidar, flying on board a King Air B200 plane to probe levels of carbon dioxide and water vapor.

Simultaneous monitoring
Principal investigator Upendra Singh said in a NASA release: “It is the first time with active remote sensing we'll be measuring CO2 and H2O together simultaneously and independently. We are in the process of analyzing terabytes of data, and initial results show we have successfully demonstrated the technique - a unique milestone by itself.”

Said to be the result of several years of intense development, the triple-pulse lidar builds on an earlier version of the instrument that used a double-pulse source but could only measure CO2. Now the triple-pulse action means that the lidar equipment can probe the two greenhouse gases and make a reference measurement.

“In the beginning, we thought we could never build it,” admitted Singh. “But NASA’s Earth Science Technology Office, who funded this work, was OK with it because the concept was so unique that, if you could build it, the payoff is quite large.”

Ultimately, it is hoped that the system could be deployed in space, where the active transmitter would be able to take measurements at any time of the day or night. Currently the passive systems in space are limited to daytime operation because they rely on solar radiation.

Oscillator design
In a 2016 conference paper, Singh and colleagues outlined the development of the triple-pulse IPDA system, which is based around a diode-pumped holmium/thulium-doped YLF crystal oscillator emitting high-energy pulses at a wavelength slightly longer than 2 µm. The precise wavelength corresponds to the “R30” absorption line of CO2.

In the full system it is combined with a 40 cm Newtonian telescope receiver, focusing the light to a 300 µm diameter spot.

“Wavelength selection and laser transmitter operation allows measuring both species independently and simultaneously,” reported the team in that presentation. “This is the first demonstration of measuring two different atmospheric molecules with a single instrument.”

“Critical transmitter and receiver enhancements were implemented in the new triple-pulse design that significantly advance the technology,” they added. “In the transmitter, modifications include triple-pulse operation of the laser and wavelength control design. In the receiver, updates includes additional high performance e-APD [avalanche photodiode] detector and advanced data acquisition system.”