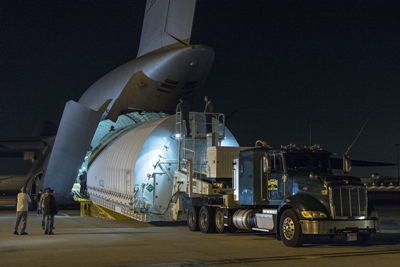 NASA says that the two “halves” of the James Webb Space Telescope (JWST), due to launch in just over a year, are now both in California, ahead of final integration to form the complete observatory.

The optics and scientific instruments, which have thus far been developed and tested in a separate location, now sit alongside the spacecraft element at key contractor Northrop Grumman Aerospace Systems’ facility in Redondo Beach.

‘Major milestone’
Eric Smith, director of the JWST program at NASA, added: “This is a major milestone. The Webb observatory, which is the work of thousands of scientists and engineers across the globe, will be carefully tested to ensure it is ready to launch and enable scientists to seek the first luminous objects in the universe and search for signs of habitable planets.”

Once in orbit, JWST will be able to search to the very edge of the universe. Optimized for infrared light collection, the 6.5 meter diameter gold-coated primary reflector will represent the most powerful telescope optics ever deployed in space.

The OTIS suite includes numerous photonics-based tools, among them a mid-infrared instrument collecting wavelengths out to 28 µm that is designed to probe not only distant galaxies but also objects in the Kuiper belt just outside our own solar system, and proto-planetary dust swirls.

In preparation for leaving the Johnson Space Center, OTIS was placed inside a specially designed shipping container called the Space Telescope Transporter for Air, Road and Sea (STTARS), and flown in a US military aircraft to to Los Angeles International Airport. After arrival, the unit was driven from the airport to Northrop Grumman's Space Park facility.

Scott Willoughby, VP and program manager responsible for JWST at Northrop Grumman, said: “It's exciting to have both halves of the Webb observatory – OTIS and the integrated spacecraft element – here at our campus. The team will [now] begin the final stages of integration of the world's largest space telescope.”

During the summer, OTIS will undergo additional testing before being combined with the spacecraft element to form the full Webb observatory. Once the telescope is fully integrated, the entire observatory will undergo “observatory-level” testing ahead of the planned launch from Kourou, French Guiana.