University of Valencia implant corrects the condition by acting as a diffractive lens. 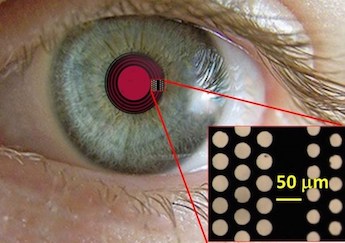 Recent advances in the treatment of presbyopia have included the development of optical structures designed to be surgically implanted into the cornea of one eye, able to compensate for the loss of focusing power caused by the condition.

The first such corneal implant to gain US FDA approval was the Kamra inlay, which positions a thin opaque ring into the field of vision, and increases the depth of focus for the patient through the pinhole effect. Other inlays are designed to work by locally modifying the refractive index or curvature of the cornea.

A necessary feature of all successful inlays, however, is ensuring that the flow of nutrients to the cornea is not disturbed, by incorporating suitable micro-holes into the design through which nutrients pass. A project led by the University of Valencia has now developed an alternative inlay design which may lead to more satisfactory outcomes for patients, by turning the intrinsic diffraction effects of the micro-holes to its advantage.

Distributing the holes in specific annular zones of the inlay allows the new design to act as a diffractive lens, rather than deliver a pinhole view. The original research was published in Journal of Biophotonics.

A similar concept, termed a photon sieve, has been employed in the past for the focusing of X-rays, but this project represents the first use of the concept in a corneal inlay. Walter Furlan of the University of Valencia's Diffractive Optics Group commented that the ability to vary the density of holes in different areas of the diffractive corneal inlay (DCI) could allow it to generate different foci to correct for distinct optical aberrations.

"The DCI was conceived by merging two concepts, the photon sieve and the pinhole effect, to create the first diffractive corneal inlay," he said. "Taking advantage of the light diffracted by the micro-holes in its surface nutrient, the DCI creates a focus for near-distance in the eye. The spatial distribution of the micro-holes in the inlay can be optimized to vary the relative intensity between the near and far foci, meaning that the design parameters of the DCI can be customized. This is a new concept in corneal implants."

DCI printed on a soft contact lens
Although the DCI could ultimately be fabricated using the same technology and polyvinylidene fluoride material currently used to construct the Kamra, the team's proof-of-concept inlay was made from graphene oxide sheets around five microns in thickness and perforated by a femtosecond laser, with graphene's high biocompatibility with corneal tissue in mind. Optical-bench testing showed that the DCI performed better than a Kamra inlay, particularly at the near and far foci.

The DCI has not yet been physically tested in patients, but Furlan said that tests related to human use are now beginning, including assessment of the inlay using a commercial visual simulator and tests of different transparent designs that could be turned into multifocal intraocular lenses.

Another trial will assess soft contact lenses in which the DCI structure has been printed. Furlan said that the team had now taken delivery of these lenses, with trials due to begin in the near future.

"We are persuaded that our DCI has great potential, and can even be adapted to construct intraocular lenses," he commented. "Perhaps the biggest challenge for us to overcome now is to catch the attention of the manufacturers of corneal implants and intraocular lenses."