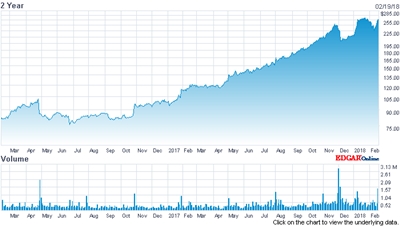 IPG Photonics has reported sales growth of 40 per cent for its 2017 annual results – but the company’s stock price slipped nearly 8 per cent on news that the rapid rate of expansion is expected to slow this year.

“The list of billion-dollar revenue high-tech companies that grow annual sales by 40 per cent is very short,” CEO and founder Valentin Gapontsev told an investor conference call discussing the latest results, also pointing out that the figure represented the company’s fastest rate of growth in six years.

"We capped off one of the strongest growth years in IPG's history with a record fourth quarter, driven by accelerating adoption of our high-power fiber lasers across our largest applications and geographies,” he added.

While that rate of growth remained extremely strong in the closing quarter of the year – sales in the three months to December 31 rose 29 per cent year-on-year, to $361 million – CFO Tim Mammen said that IPG was targeting growth of 10-15 per cent in 2018.

However, this time last year IPG’s executives had also projected sales growth of 10-15 per cent for 2017, a figure that turned out to be a huge underestimate, and which was revised sharply upwards when the company reported its Q3 results.

Growth factors
Analyzing the faster-than-expected rate of growth last year, Gapontsev told investors: “Our success in 2017 was largely driven by the secular shift to high-power products.”

Added to that was rapid growth in laser sources of 1-2 kilowatts for lower-end cutting systems, said the CEO, noting that these sources were now displacing non-laser machine tools like simple punches and presses.

He also pointed out that last year IPG sold more than 10,000 lasers with an optical power in excess of 1 kilowatts, a jump of more than 70 per cent on the 2016 figure.

Tax changes
While IPG’s profit margins have continued to grow with the expanding sales, the company did post a year-on-year decline in net income in the closing quarter of 2017, down from $75 million a year ago to $53 million.

However, that was entirely due to the recent changes in US tax law, the full implications of which IPG – along with everyone else – is still trying to figure out.

In the end, IPG’s overall tax rate is expected to drop from around 30 per cent in 2017 to approximately 26 per cent this year.

“As we continue to assess the benefits of tax reform to IPG, we believe that we may be able to reduce our effective rate a little further,” noted Mammen.

• Despite that prospect, not to mention the smashed sales target for 2017 and expanding margins, IPG’s stock price slumped in value by a little under 8 per cent on the Nasdaq exchange following the earnings call.

Closing at $239.36 on February 16, the stock is down from the all-time high of $264 reached last month, but is still double the valuation a year ago, with IPG’s market capitalization standing at some $12.8 billion.