Laser company remains on track for another record-setting year despite apparent volatility in key displays sector. 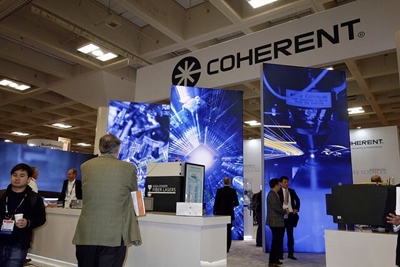 Californian laser giant Coherent has posted sales of nearly $478 million in its latest financial quarter, with pre-tax profits remaining steady ahead of what CEO John Ambroseo is expecting to be another record-breaking year.

Despite what Ambroseo described as “a lot of turbulence” in the displays sector – a critical one for Coherent’s excimer laser sales – in recent weeks, the CEO said that customers were showing “no current sign” of delaying or cancelling orders for laser annealing systems.

“We also reviewed fab utilization rates and system installations and concluded that service revenues are in-line with our expectations,” Ambroseo told investors as the company delivered solid pre-tax profits of $100.8 million – virtually flat with the prior quarter, despite a slight seasonal dip in revenues.

In the most recent quarter, that was augmented by what Ambroseo described as Coherent’s first volume orders for high-power fiber lasers from one of China’s largest machine-tool integrators. The unspecified customer has ordered a combination of 3 kW and 6 kW lasers, with the CEO noting:

“This is a great first step in a large account. In the overall sheet metal market, more than half our laser orders were for lasers above 6 kilowatts, which is following the trends in the market.”

Orders from the automotive sector are also on the up, with one “top-tier” supplier ordering high-power fiber sources for fuel injector welding.

Turning to the medical sector, Ambroseo told investors that one blot on the current commercial landscape was in ophthalmic applications, where the large installed base of vision-correction tools already performing accurate procedures has dimmed the prospects for future sales.

But another positive area looks to be aerospace and defense, where the CEO noted the evolution of directed-energy laser weapons from the proof-of-principle stage to genuine deployment. Coherent’s Nufern subsidiary, acquired through the purchase of Rofin-Sinar, has previously been closely involved with the US military on laser weapon development .

“Directed-energy devices are being called upon to dazzle, disable or destroy targets in land, sea and air platforms,” Ambroseo said. “The timeline calls for low-power dazzlers to deploy in 2019. We are providing modules to primes and sub-primes in this area.”

OLED glut
The CEO told investors that the company remained on track to post another record-breaking financial year, to top last year’s sales total of $1.72 billion. Explaining the “turbulent” situation in the displays sector – seemingly prompted by assumptions based on leaked sales figures for Apple’s iPhone X smart phone - the CEO indicated that the apparent disconnect was due to the timing of Apple’s production ramps.

Swings in iPhone X production volumes appear to have left Apple’s primary organic LED manufacturer with a short-term glut, but unable to supply other OEMs who are not yet ready to switch from LCD to OLED technology – largely as a result of Apple’s stranglehold on the supply chain.

“Other panel manufacturers continue to invest in technology and capacity as a means to broaden the OLED market and capture share,” Ambroseo assured investors. “They have shown no signs of slowing down.” 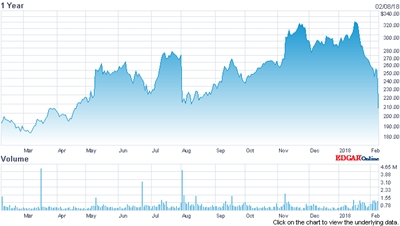 He and CFO Kevin Palatnik are anticipating sales in the current quarter to land somewhere between $470 million and $490 million, with Palatnik explaining that the delayed shipment of a “Linebeam” system for displays production would have a $10 million impact on that top-line figure.

Palatnik stressed that this was not due to any demand issue, but the result of a snafu in the delivery of a critical component. “We are in the process of implementing actions to remediate this issue, and expect to be back on track with shipments within a quarter’s time,” said the CFO.

• Investors appeared unimpressed with that outlook, however. In early trading after the financial results release, Coherent's stock price slumped in value by around 20 per cent. At just under $200 on the Nasdaq exchange, the laser company is down nearly 40 per cent in just the past three weeks, from an all-time high of just over $324.