Analyst IHS Markit says FPD demand growth, which began in 2016, is slipping due to over-capacity.

The flat panel display (FPD) equipment market is set to decline after an unprecedented build-up in 2017. According to analyst IHS Markit, panel makers are “now taking a more cautious approach as they wait for demand to catch up to rapidly ramping capacity”.

The FPD equipment market is forecast to fall from $20.2 billion in 2017 to $14.0 billion in 2020, declining at a compound annual rate of 11.6%, according to the analyst, which regularly produces market reports on diverse high-tech sectors.

"The expansion of the FPD equipment market that started in 2016 has been driven by the high equipment intensity of new flexible active-matrix organic light-emitting diode (AMOLED) display factories and the scale of Gen 10.5/11 LCD factories,” commented Chase Li, senior analyst at IHS Markit.

“This expansion has been further fueled by Chinese local governments, which have supported panel makers with various mechanisms such as financing, land grants, reduced taxes, infrastructure and direct subsidies.”

IHS Markit adds that such broad government support of Chinese FPD fabs for all types of display technologies and factory sizes is starting to distort the supply-demand balance as the new capacity begins to ramp.

In the case of flexible AMOLED factories targeting smartphones, many multiple billion-dollar investments and even expansion phases have been moving forward before panel makers have proven their ability to produce high quality panels at high yields and competitive costs. 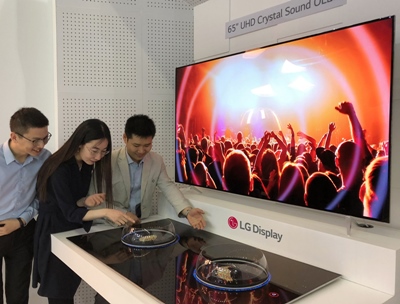 This situation has caused both panel makers and China’s local governments to evaluate more critically new flexible AMOLED factory plans. Even South Korean panel makers have pulled back from their previous plans to expand Gen 6 flexible AMOLED capacity continuously due to slower-than-expected panel demand growth. Reduced spending on AMOLED fabs for mobile applications accounts for most of the decline in 2018 and 2019.

Chinese local governments are continuing to fund selected projects despite the tightening of credit, particularly for Gen 10.5/11 LCD factories. These projects are predicted to keep equipment spending “relatively firm through 2020”.

However, IHS Markit further comments, “[This] threatens to push the large display supply/demand glut level to a record annual high of 18% in 2020, unless panel makers reduce excessive LCD TV panel capacity by converting some of it to OLED TV panel production and shutter less productive legacy factories.”

High-end OLED TVs are one segment that is still expected to face tight panel supply for the next few years, says the anlyst. Although, demand is low compared to standard LCD TVs, OLED TVs are a growing niche, whose panel demand is forecast to rise from 2.9 million units in 2018 to 6.7 million units in 2020. Being the only panel maker to have commercialized OLED TV panels to-date, LG Display is shipping all the panels it fabricates and running its current factories at full utilization.

According to the AMOLED and LCD Supply Demand & Equipment Tracker, produced by IHS Markit, equipment spending in 2019 will be significantly supported by the conversion of legacy LCD fabs to advanced AMOLED factories. Manufacturers JOLED, Samsung Display and others are utilizing previously-purchased TFT tools, while adding OLED frontplane, color conversion, cell and module equipment, in the hope that they will keep them ahead of rivals and enable them to ride the growth of the AMOLED TV market.

“The FPD equipment market has always been highly volatile depending on market and technology changes. Some slow-down is not surprising following years of record high equipment spending,” Li added.

“How all the equipment being installed will affect the future opportunity is a question that equipment makers are now struggling to answer. Based on IHS Markit analysis, the correction will continue beyond 2020. Even so, hope for expanding the new technology investments in AMOLED and quantum-dot (QD) OLED TVs as well as foldable displays, combined with industry restructuring and increased demand as prices fall offers the hope of another positive cycle coming.”