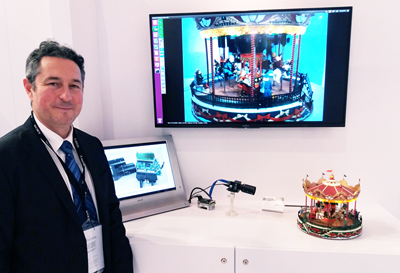 Arnaud Destruels, Marketing and Marcomms Manager Europe for Sony ISS described the company’s range as "an evolutionary development, which now ranges from cameras through software to applications."

New at Vision is the 4K FCB Global Shutter CMOS XC and UMC ranges, which are targeting surveillance and medical applications; and the Camera-Linked Gigabit Ethernet v MV cameras up to 12 M pixel.” Here we are using the newest family of Sony sensors,” said Destruels.

“With the evolution of Sony consumer cameras we wanted to provide a B2B version of the consumer camera s at up to 20MP, which are very interesting for UAV and 3D scanning applications. This latest development was based on a consumer model, which conventionally have only a six months to 12 month lifespan, so we are developing a B2B version with a three-year lifetime.”

The B2B market is not only about manufacturing it’s also for non-manufacturing applications such as medical, surveillance and military. Sony ISS’s 20MP Camera Link-enabled camera is said to be the first to operate at 13 fps.

Destruels continued, “We have formed a collaboration with Edmund Optics in their new telecentric lenses. The camera collects a 2D image and the software can builds an estimated 3D image. It is a virtual 3D image but effectively based on the resolution of the 2D image with a reduced time of analysis for such purposes as product quality verification.”

One of the hot topics at this year’s Vision expo was Embedded Vision (EV), so what is Sony doing in this respect? Destruels commented, “Considering EV, for Sony our aim is not to provide a finished solution but to support our customers and partners with the means towards developing an EV systems, such combined with an Nvidia board, which is the effective PC.

“The point here is that Sony ISS can support our customers wishes to develop an embedded vision system and we are talking about the general need for AI and deep learning to enable that. There are a lot of other suppliers saying that they have developed complete EV / AI/ DL systems already. But at Sony we like to be pragmatic and not to be pretentious.”

Destruels remarked that, in fact, Sony already operates its own EV systems in some of its factories but added that these are not yet on the market as full packages. “These are really a work in progress. We are not naïve. We think that some camera manufacturers are very arrogant when they say that they have developed comprehensive EV systems,” he said. 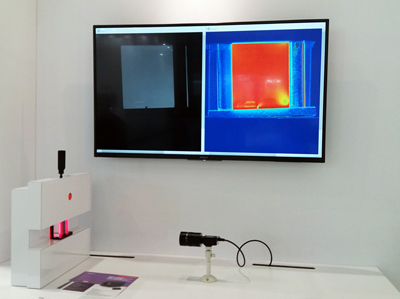 Also on display was Sony ISS’s “Polar Sense” brand of polarized cameras which have two particular applications that Destruels believes will both find good market reaction. Nowadays, in applications it is also important to provide not only the camera but also the software design kit (SDK).

“The first market is traffic control because this camera can see through windscreen reflections and software will automatically measure the number of occupants, for example for road tolling,” he said. The second market is glass manufacturing – such as for mobile handset screens. Destruels added, “in this industry, the makers use MV cameras to understand the glass processes, especially the stresses applied during manufacture. Here, our SDK can crate a specific app to measure and evaluate stress in the glass.”

Last but not least was the 4K Mitene system, launched in Japan, China and the US in 2017, and now scheduled to launch in Europe in 2019. Mi-te-ne (Japanese for “look at me”) is essentially an interactive digital signage platform that expands traditional displays with functional “eyes” and “intelligence” using augmented reality AR technology. Viewers and the surroundings can become part of the display in the form of a real-time, audio-visual, interactive experience.

Destruels concluded, “this development demonstrates the evolution of Sony from hardware products to AR-based applications and our shift towards content and entertainment. We are supporting industry but also manufacturing, non-manufacturing, entertainment and you need smart vision systems for all of these.”