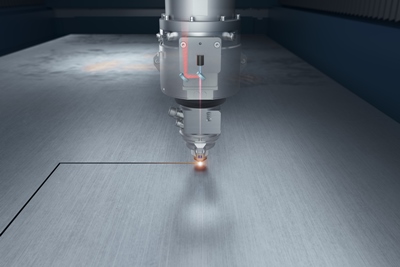 Industrial laser firms at this week’s EuroBlech trade show in Hanover, Germany, are exhibiting new products and features for machine tools and sheet metal processing applications, with much of the focus on tools for autonomous factories.

Two of the show’s largest exhibitors - Germany’s Trumpf and Swiss firm Bystronic – have both highlighted advances in autonomous laser cutting. Ahead of the event, Trumpf said it would present a range of “digitally connected applications”, with its chief of machine tools Heinz-Jürgen Prokop identifying artificial intelligence as the key to future productivity gains.

That marks something of a change in thinking when it comes to laser cutting machines, where advances in the raw power of the laser source has previously driven a relentless increase in cutting speeds, in turn increasing economic value.

“Prokop notes that there is now little to be gained by striving for ever higher laser power,” suggested Trumpf’s pre-show press announcement, adding that the focus should instead fall on connected machines and processes. Combined with intelligent data analysis, Prokop argues that this is where the biggest productivity gains can be achieved.

Smart sensors
At the event itself, Trumpf highlighted that focus through its “TruLaser Center 7030” system, described as a self-learning machine, its “TruLaser Cell 7040” tool with a number of automated features, alongside cloud-based machine analysis, and integrated smart sensors that “take laser cutting speeds to a new level”.

“This year's Euroblech sees Trumpf present a major milestone on the road toward autonomous machines: active speed control,” claimed the Ditzingen firm on arrival at the event. “With this new feature, the system looks straight through the nozzle right at the cutting zone, monitoring it in real-time and autonomously controlling the feed rate of solid-state laser machines.”

The new function is said to ensure a more reliable process for both flame and fusion cutting, reducing scrap and saving on rework, with the active speed control feature responding immediately to any changes in the material being processed.

“The system allows users to achieve tangible gains in productivity with their machines, significantly lowering part manufacturing costs,” added the firm. One highlighted example is the ability to maintain the position of the laser beam in relation to the center of the nozzle during the entire cutting process – the system telling an operator if there are any deviations, which helps avoid scrap.

As for the TruLaser Cell 7040 tool, compatible with a wide range of beam sources and high laser power, the focus has been on reducing unproductive downtime, for example when re-tooling, loading or unloading.

“When companies are making batches of products that change on a frequent basis, the cost of this non-productive time really adds up,” says Trumpf product manager Thomas Kirchhoff. “The TruLaser 7040 saves time thanks to its smart optic set-up station, a swivel-mounted apparatus mounted on the machine frame that automatically orientates the optics within the work area.” 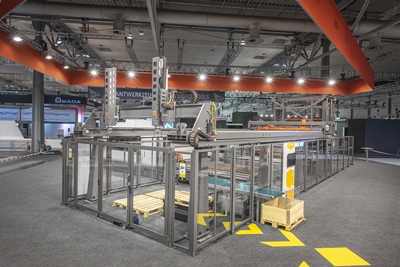 Automated cutting with Bystronic
Also on the trade show floor, Bystronic unveiled what it claims to be a fully automated laser cutting system, based around a 10 kW fiber laser and an in-house-developed cutting head that adapts the beam’s focal point to match sheet thickness and material.

In its setup, loading and unloading automation is connected directly to the fiber laser, adds the Swiss machine tool firm. This handles the entire material flow between the laser and the integrated storage system, which supplies all the raw metal sheets required for the cutting jobs: steel, stainless steel, aluminum, and non-ferrous metal sheets like copper and brass in thicknesses of up to 25 mm.

Finished cut parts and residual sheets are then returned to the storage element, which has a maximum capacity of 24 tons.

Laser specialists also at EuroBlech this year include the likes of II-VI, IPG Photonics, Lumentum, Coherent-Rofin, and nLight. IPG’s German division is highlighting its new “ultra-compact” 3 kW fiber laser, said to weigh 140 kilos and take up just 0.2 m3 of space. 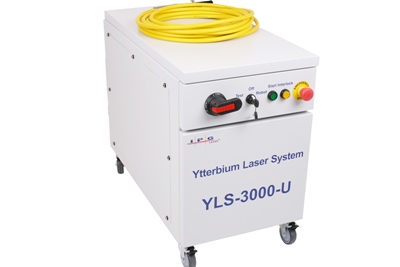 nLight’s compact and flexible options
Banging a similar drum is nLight, with what it claims is the industry’s most compact 10 kW fiber laser source. The 6 kW, 8 kW and 10 kW versions of its “CFL” product line each occupy a 1010 x 800 x 560 mm footprint, according to a company data sheet.

“The combination of high power and compact size gives end users a considerable advantage in shop floor utilization while benefitting from the latest technologies for laser processing performance, reliability, and serviceability. These products also set the stage for future power scaling in small form factors.”

EuroBlech also represents one of the first opportunities to see the US firm’s programmable “Corona” fiber lasers, available in powers up to 5 kW. “Initial adoption has exceeded our expectations,” noted Bell, adding that several integrators would feature the sources at EuroBlech and other key trade shows.

The Corona lasers are said to allow an end user to tune the size and shape of the output beam, from small-diameter top-hat shapes to large-diameter donut patterns, without the need for free-space optics or complex beam combiner setups.

Among the component-level suppliers taking part in the Hanover exhibition, the Furukawa Electric subsidiary OFS is showing off its “TrueLase” singlemode optical fiber, described as a next-generation ytterbium-doped gain medium.

“We are pleased to provide new options for customers who prefer higher power, improved efficiency and cost-effective multi-kilowatt systems,” said marketing chief Steve Allen. “OFS will continue to develop and provide solutions for the demanding applications our customers are addressing. This is the next generation in active optical fiber to go beyond the 1 kW cavity.”

Elsewhere on the hall floor, the Illinois firm Richardson Electronics introduced new dust collection filters for fiber lasers. “The unique design allows the filter to be installed using existing system hardware along with new retaining bars that are included with each filter where necessary,” says the company, adding that they can be used as an after-market replacement for Trumpf filter elements numbered 2260691.