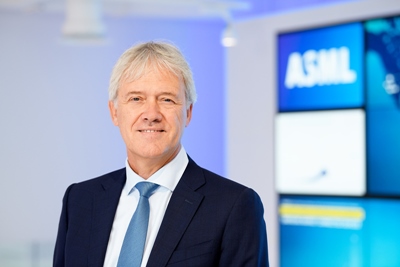 Lithography company ASML is expecting to ship 30 of its state-of-the-art extreme ultraviolet (EUV) systems next year, as its chip-manufacturing customers ramp production of their latest devices.

If accurate, that would represent a significant increase on this year’s likely total of 18 EUV systems, and last year’s total of 12. Each tool sells for upwards of €100 million and is based around ultra-high-power laser amplifiers whose beams are fired at tin droplets to generate EUV light in a complex source chamber.

New EUV tool in H2
The figures, announced by company executives as part of ASML’s latest financial results, suggest that EUV systems will account for approximately €3 billion of sales in 2019. Although the first commercial chips made using EUV are yet to appear, recent announcements from key ASML customers TSMC and Samsung suggest that this milestone will soon be hit.

As far as this year is concerned, ASML is now expecting to report total annual revenues in the region of €11 billion – a figure that would represent a jump of around 20 per cent on the already record-breaking figure of €9.05 billion posted for 2017.

“We had a nice linear trend in our EUV shipments this year,” said company CFO Roger Dassen. “We had three shipments in Q1, four in Q2, five in Q3, and we are looking at six for Q4.”

That likely total of 18 EUV tools shipped in 2018 is lower than the 22 systems that ASML’s executives had predicted back in January, meaning that four have slipped into the 2019 schedule.

“Based on some end-of-year production issues and also customer readiness we have a number of shipments that we originally planned for 2018, [that will] now ship early 2019,” Dassen explained. “If we then look at 2019 we’re looking at a plan of 30 shipments for the full year.”

2019 should also see the introduction of ASML’s higher-productivity “NXE:3400C” version of the equipment in the second half of the year. It will support a throughput of at least 155 wafers per hour, up from the current 125 wafers per hour.

“We believe that with that higher productivity 30 systems will be enough to cater for the demand that our customers have for the full year 2019,” the CFO noted, adding that he expects another healthy batch of orders in the closing quarter of this year.

Productivity ramp
In a call with investors to discuss the latest results, which saw ASML post third-quarter sales of €2.78 billion - €512 million attributed to EUV tools - CEO Peter Wennink said that he saw strong current demand from both logic and memory customers continuing into 2019. At present the demand for EUV equipment is skewed more towards logic devices, as manufacturers move to ramp production at the latest 7 nm production “node”.

And although the target of 30 EUV system shipments in 2019 is lower than original expectations, Wennink pointed out that the accelerated introduction of the new higher-throughput NXE:3400C tools will compensate for that. In addition, the extra capacity of the new equipment strengthens the economic case for deploying EUV in the production of several layers in DRAM chips.

“With this higher productivity we expect to be able to meet our customers' current EUV capacity plans in 2019,” the CEO told investors, adding that order flow expected through the end of this year should cover the EUV demand in 2019.

Immediately following its update, and with Wennink saying that he did not expect any significant impact on business from the latest US-China tariff actions, ASML’s stock rose strongly, regaining some of the losses it has given up since it hit an all-time high in July this year. However, on a generally weak day for global stock markets, partly the result of a cautious outlook from IBM, ASML’s valuation ended the day up only slightly on where it had begun.