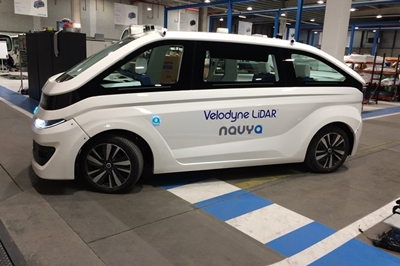 Lidar has emerged as a key technology theme at the Consumer Electronics Show (CES) taking place this week in Las Vegas, with applications in autonomous vehicles showcased by multiple vendors and their car manufacturer partners.

Among the lidar companies to launch the latest incarnations of their photonics-based technology are AEye, Innoviz, LeddarTech, Luminar, Valeo, Quanergy, TetraVue, and Velodyne, with Toyota and Chevrolet cars among those demonstrating the latest lidar capability, alongside brand new vehicles from Navya and Fisker.

Of the more established lidar developers, Velodyne’s raft of announcements included the launch of two new products that it claims will “transform the world of transportation”. One of those is its “VLS-128” solid-state lidar sensor, which is said to be on board “fleets” of autonomous vehicles being readied for launch this year.

Velodyne’s commercial officer Mike Jellen says that he expects 2018 to go down as a “watershed year” for both Velodyne and the emerging industry, adding that the company was showcasing “the lidar that will be seen on the first wave of autonomous vehicles”.

One of those first launches could be a self-driving taxi from the Paris-based startup Navya. The “Autonom Cab”, described as the world’s first fully autonomous taxi on the market, is making its first US appearance on Velodyne’s CES exhibition booth. Able to carry up to six passengers, it features no fewer than ten lidar units, along with four radar sensors and six cameras.

Quanergy and Fisker
Meanwhile Quanergy’s latest “S3” solid-state lidars are appearing on a new luxury electric vehicle from the recently relaunched auto maker Fisker. Seen as a competitor to the better-known Tesla electric vehicles, the Fisker EMotion is making its debut on the Quanergy stand, sporting five of the S3 sensors in a car that also features four “butterfly wing” doors.

Quanergy CEO Louay Eldada said ahead of the CES event: “This year will be a marquee year for Quanergy: in the coming months, the world will see our technology being deployed in a wide range of applications, leading to propelling the industry at large.”

Eldada and colleagues also launched the firm’s new “Qortex” perception software platform in Las Vegas, developed over the past ten years and said to be compatible with both solid-state sensors like the S3 and older mechanical lidars. The CEO claims that this makes Quanergy the only lidar manufacturer to commercially produce an integrated hardware and software platform.

That claim might be disputed by some of the emerging challengers to Quanergy and Velodyne. Among them are AEye and Luminar Technologies, both of whom have developed high-resolution lidars based around 1550 nm lasers – the longer, more eye-safe wavelength allows far higher powers to be deployed, and longer-range sensing, although the laser emitters can be more expensive to produce. 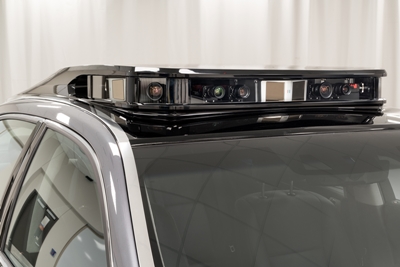 Luminar on board: Platform 3.0 lidar from TRI

AEye and Luminar
In Las Vegas this week, AEye is revealing its new “AE100” product, described as a robotic perception system for autonomous vehicles that integrates the firm’s MEMS-based lidar and low-light high-definition camera with artificial intelligence and “software-definable hardware”.

Pictured on board a Chevrolet car by AEye, the roof-mounted system is scheduled to become available to OEMs in the summer, with on-road demonstrations planned for Las Vegas during CES.

Luis Dussan is the founder and CEO of AEye, which has won backing from Intel and Airbus, among others. He says that the company’s approach allows sensors to mimic the human visual cortex – in his words, bringing real-time intelligence to data collection.

“As a result, the system not only captures everything in a scene - it actually brings higher resolution to key objects and exceeds industry required speeds and distances,” Dussan added.

“By solving for the limitations of first generation lidar-only solutions, AEye is enabling the safe, timely roll-out of failsafe commercial autonomous vehicles.”

“Platform 3.0 has a very sensor-rich package that makes it one of the most perceptive automated driving test cars on the road,” TRI says, adding that its four high-resolution lidar heads ensure 360-degree coverage and the ability to discern different types of dark objects at long ranges.

The test vehicle also features shorter-range lidar sensors on all four sides to detect nearby hazards such as children or debris in the road. “The new platform remains flexible for incorporating future breakthrough technology as it becomes available,” TRI added, while Luminar will be showcasing the latest iteration of its 1550 nm lidar at the SPIE Photonics West event in San Francisco later this month.

Though still a test vehicle, TRI will put its Platform 3.0 into low-volume production this spring, creating the cars from stock Lexus models at its research center in Michigan.

“Production volume is intentionally low to allow for continued flexibility given the [speed] with which TRI has progressed in updating its test platform,” it said. “There have been three major updates, including two new generation test models, in less than a year, and TRI anticipates continued rapid developments.” 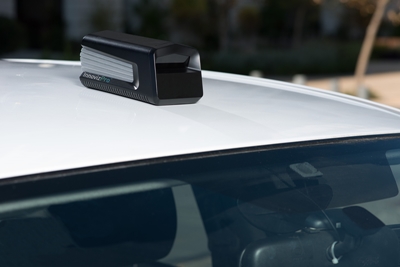 Innoviz, LeddarTech and II-VI
Also in Las Vegas this week, and claiming a “giant step” forward with its new sensor is the Israeli startup Innoviz Technologies. Said to be have a range of 150 meters and a frame rate of 20 frames per second, the InnovizPro is not yet rated as “automotive grade”, but is being offered at “significantly reduced costs” and a more compact size than rival technologies, ahead of the company’s more advanced InnovizOne model.

Innoviz CEO and co-founder Omer Keilaf claimed: “We are addressing a major need for high-resolution scanning technology at lower cost, with no minimum order required. While we continue to work towards automotive-grade lidar with InnovizOne, our partners can order InnovizPro now in order to gain access to the most advanced lidar currently available.”

The company, flush with $82 million of venture finance raised since 2016, already has deals in place with the likes of Magna International and Aptiv (formerly Delphi), and says it has a new design win with a “top-tier” auto maker.

Another firm attempting to make an impact in Las Vegas is Canada’s LeddarTech, which chose the CES show to unveil its “Leddar Ecosystem” and details of a new hook-up with simulation software provider Optis.

CES also saw an appearance from diversified optical component maker II-VI, which introduced a special wide-incidence mirror designed for lidar applications and said to be compatible with 905, 940, and 1550 nm lasers – including vertical-cavity surface-emitting lasers (VCSELs) that II-VI also manufactures.

“We are excited to introduce what we believe is the first wide incidence angle mirror of its kind on the market,” said Vincent Lin from II-VI’s Photop division. “This product leverages our strong intellectual property in dielectric coatings to achieve superior long-term reliability compared to existing enhanced silver or aluminum mirrors.”

The dielectric coating designs, said to be stable in extreme operating environments, offer up to 99 per cent reflectance and high uniformity over incidence angles of up to 85°.