'ExTrA' telescopes at ESO site in La Silla collect light from target and four comparison stars and feed it into a multi-object spectrograph. 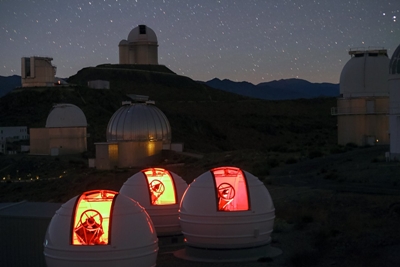 The European Southern Observatory (ESO) says that three new telescopes dedicated to the search for Earth-sized exoplanets have made their first observations.

The “Exoplanets in Transits and their Atmospheres” (ExTrA) project telescopes at the La Silla Observatory in Chile collect light from their target star and four comparison stars, before that light is fed through optical fibers into a multi-object spectrograph.

ExTrA will search for new worlds orbiting relatively nearby red dwarf stars in the Milky Way, with the novel optical design of the observatory said to provide much-improved sensitivity compared to previous efforts.

“Astronomers now have a powerful new tool to help in the search for potentially habitable worlds,” announced ESO.

Commercial partners
Developed in France with funding from the European Research Council and the French Agence National de la Recherche, the 0.6 meter-diameter Ritchey-Chretien design telescopes will be operated remotely from Grenoble.

Several commercial partners are involved in ExTrA, with telescopes and mounts supplied by Astrosysteme Austria, and domes provided by Germany’s ScopeDome.

That optical system will monitor the intensity of light received from many red dwarf stars and look for a slight dip in brightness that could be caused by a planet transiting across a star’s disc.

Project lead Xavier Bonfils said: “The kind of light we are observing - near-infrared - is very easily absorbed by Earth’s atmosphere, so we required the driest and darkest conditions possible. La Silla is a perfect match to our specifications.”

The transit method has been used to detect most of the exoplanets discovered so far, and typically relies on comparing the brightness of the star under study with other reference stars to spot the tiny dip in intensity.

However, making sufficiently precise measurements this way to detect small, Earth-like planets is extremely difficult – especially from a terrestrial location with infrared “noise”. As a result, the vast majority of the exoplanets discovered thus far are much larger worlds, more on the scale of Jupiter than Earth.

But by adding a spectral element to an optical system that typically relies on differential photometry measurements, information about the brightness of the stars can be collected across many different colors, overcoming some of these limitations.

The approach helps to mitigate the disruptive effect of Earth’s atmosphere, as well as the noise introduced by instruments and detectors, thus improving the achievable precision.

Spectral capability
Because a transiting planet will block a greater proportion of the light from a smaller star, ExTrA will focus on targeting nearby examples of specific kinds of small, bright stars known as “M dwarfs”, which are common in the Milky Way.

Such stars are expected to host many Earth-sized planets, and should be prime targets for astronomers looking to discover and study distant worlds that might be able to host life. The nearest star to the Sun, Proxima Centauri, is an "M dwarf" and is already known to have an orbiting Earth-mass planet.

The spectral capability of the ExTrA observatory means that astronomers will also be able to probe the properties of exoplanets in some detail, and determine just how similar to Earth they could be.

Jose-Manuel Almenara from the team said “With ExTrA, we can also address some fundamental questions about planets in our galaxy. We hope to explore how common these planets are, the behavior of multi-planet systems, and the sorts of environments that lead to their formation.”

Bonfils adds that ESO’s Extremely Large Telescope (ELT), scheduled for first light in 2024, will add the capability of atmospheric studies of exoplanets – and therefore the ability to spot signs of extra-terrestrial life.

“The study of exoplanets is bringing what was once science fiction into the world of science fact,” said the project lead, while in a 2015 SPIE-published paper detailing the project the ExTrA team wrote:

"The exoplanets detected by ExTrA will be amenable to atmospheric characterization with VLTs, JWST, and ELTs, and could give our first peek into an exo-life laboratory."