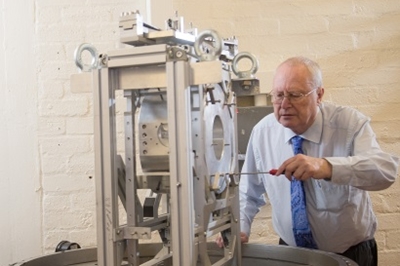 Hough won the Gold Medal, whose past recipients include the likes of Albert Einstein, Edwin Hubble, and Stephen Hawking, in recognition of his pioneering work in the development of suspended mirror optics used in gravitational wave detection.

The giant optical components are critical elements of the kilometer-scale laser interferometer facilities in the US and Italy that over the past couple of years have made the first few direct observations of the gravitational waves predicted by Einstein a century ago.

Mirror suspensions
Those observations has been made possible by the ultra-precise detection of a shift in laser interference patterns equivalent to just one-thousandth of the diameter of a proton. And Hough’s work on optics for the GEO600 laser interferometer project, a UK-Germany collaboration, paved the way for the remarkable discoveries at LIGO and Virgo.

“Over four decades, Professor Hough developed many of the key technologies and experimental techniques that made this first direct detection of gravitational waves possible,” stated RAS. “Working as part of the UK/German GEO600 team, [he] developed sophisticated mirror suspensions that enabled LIGO to reach the sensitivity required for the discovery.”

In response to the award Hough, who as the longest-serving member of Glasgow’s gravitational-wave team has been working on the technology for 45 years, said:

“I am deeply honored and delighted to have been awarded the Gold Medal. I have been lucky in my working life to be part of what I believe is the biggest scientific breakthrough of the century.”

Hough added: “I would like to dedicate this award to all my colleagues and friends who have played a vital role in the birth of gravitational-wave astronomy.” 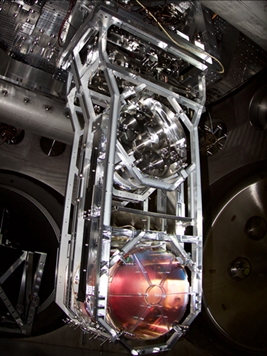 Scholarship and LIGO upgrades
Among those colleagues was the late Professor Ronald Drever, who passed away in March 2017. Drever is credited with laying much of the groundwork for gravitational-wave research and detection at Glasgow, before moving to the US in the 1980s to co-found the LIGO project.

Drever worked closely with fellow pioneers Rainer Weiss and Kip Thorne, who along with Barry Barish were jointly awarded the 2017 Nobel Prize in Physics for the detection of gravitational waves.

Following Hough’s lead, scientists and engineers at Glasgow’s Institute for Gravitational Research have made major contributions to the mirror suspensions at the heart of the LIGO and Virgo detectors, and the complex data analysis needed to confirm each gravitational-wave event.

The current mirror suspensions, upgraded before the first observation of waves generated by a distant collision of black holes, comprise 40-kilo components in the form of optical test masses, suspended below a metal mass using four silica glass fibers.

The LIGO and Virgo facilities are currently undergoing a further upgrade ahead of a third observation run – known as “O3” – scheduled to begin later this year.

Among the upgrades are test masses with more uniform coatings, and higher laser power provided by a new amplifier stage capable of more accurate pointing, both of which are expected to improve the sensitivity of the systems and enable more frequent observation of gravitational-wave events.