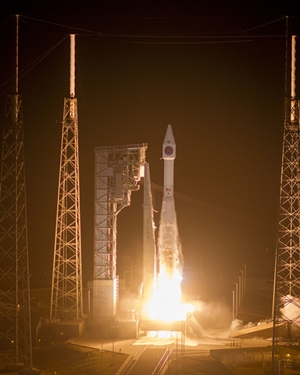 The fourth payload making up the Space Based Infrared System (SBIRS), primarily for missile surveillance, has launched from Cape Canaveral in Florida, US.

Lead contractor Lockheed Martin, which built the “GEO Flight-4” satellite, announced shortly after the launch that the payload was in communication with the US Air Force division overseeing SBIRS operations

Considered to be one of the US military’s highest-priority space programs, SBIRS is designed to provide global, persistent, infrared surveillance capabilities.

That includes quickly identifying ballistic missile launches by detecting the signature infrared radiation generated by the hot exhaust that they produce. Through a network of both geosynchronous and orbiting satellites, the intention is to have complete global coverage.

Although two more SBIRS launches are in the pipeline, this latest satellite completes the initial constellation, and once moved into geostationary orbit it will allow the SBIRS network to provide global, round-the-clock coverage coverage.

He describes SBIRS as a "cornerstone" of the US missile defense system, and adds that it is proving to be more precise and powerful than expected. “We're already improving on SBIRS, upgrading our fifth and sixth SBIRS GEO satellites to our modernized LM 2100 satellite bus at no additional cost to the Air Force,” he claimed in a Lockheed release. “On SBIRS 5 and 6 the Air Force saved $1 billion through improved production and management efficiencies.”

After severe initial cost overruns, the first SBIRS payload was launched back in May 2011, with numbers two and three following in May 2013 and January 2017. In June 2014, Lockheed was awarded a $1.9 billion contract to build the fifth and sixth elements of the network by 2022.

Lockheed has also made progress on the ground at Buckley Air Force Base in Colorado, where it says that a sophisticated new SBIRS ground control system serves as the “nerve center” for the entire SBIRS satellite constellation.

It receives vast amounts of data from the satellites’ various sensors, with operators converting the raw data into actionable reports for defense, intelligence and civil applications.

The GEO-4 payload is now transitioning to its final location in geostationary orbit, at an altitude of around 22,000 miles. Once there, the satellite's solar arrays, light shade and antennae will be deployed to begin on-orbit testing.