Project led by ICFO could boost performance of detectors in astronomy and information processing. 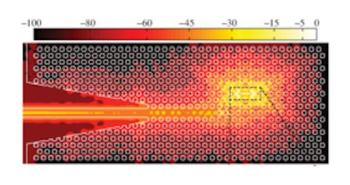 Improving the performance of single-photon detectors has been a focus of research interest for some time, thanks to their potential applications in a number of sensing and communications applications.

A project team from Harvard, ICFO, MIT, Raytheon BBN, and Pohang University has now published research into the use of graphene as a material to detect low-energy single photons, findings which may indicate a route to more sensitive detectors than are currently available. The work was published in Physical Review Applied.

At present, many single-photon detectors rely on the increase in temperature caused by the arrival of an individual photon at a sensor, an effect which inevitably becomes smaller in magnitude as the incoming photons become lower in frequency and energy.

Graphene, consisting of a two-dimensional atomic-scale lattice of carbon atoms, has become an increasingly attractive material in certain optoelectronics applications, as both the properties and manufacture of the high-tech material become better understood. In particular, graphene has a very low heat capacity, and shows electro-absorption and refraction behavior that may lend itself to efficient photodetection.

In the new study, researchers proposed the use of graphene in Josephson junctions - a configuration in which two superconducting electrodes are separated by a thin non-superconducting barrier. Electronic components built from Josephson junctions are known to have particular conduction properties that make them attractive for ultrafast computers and quantum interference devices.

With graphene as the barrier material, the new graphene-based Josephson junction (GJJ) will allow a supercurrent to flow when it is cooled down to the low temperature of 25 mK. Under those conditions, the arrival of just a single photon at the graphene layer results in a relatively significant rise in heat, causing the device to become more resistant and having a significant effect on the flow of current. This change can be readily measured as an easily detectable voltage spike across the device.

Quantum-limited detection
The team also found that this effect would occur almost instantaneously, enabling the ultrafast conversion of absorbed light into electrical signals and allowing for a rapid reset and readout.

With the principle now proven, GJJs could be integrated into conventional electronics platforms such as CMOS sensors, allowing for improved sensitivities in applications where photon detectors play a significant role.

"Our approach takes advantage of the exceptionally low electronic heat capacity of monolayer graphene and its constricted thermal conductance," said the team in its paper.

"Such a system could provide the high-sensitivity photon detection required for research areas including quantum information processing applications of optical and microwave photons, single-photon-resolving imaging arrays, radio astronomy, and other applications that would benefit from the quantum-limited detection of low-energy photons."

ICFO is part of the Graphene Flagship, the EU's dedicated research initiative looking into the potential impact of the material, and recently announced the development of a monolithic CMOS-based image sensor using integrated graphene.

“The development of this monolithic CMOS-based image sensor represents a milestone for low-cost, high-resolution broadband and hyperspectral imaging systems,” commented Frank Koppens, ICREA Professor at ICFO in June 2017 after the announcement.