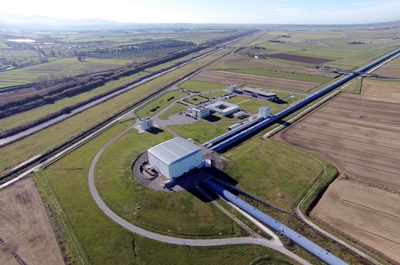 The LIGO Scientific Collaboration and the Virgo collaboration have reported the first detection of a gravitational-wave event picked up by the giant laser interferometers on both sides of the Atlantic.

Echoing the first gravity-wave detection by the twin LIGO facilities, the latest event was “heard” just days after the Virgo site near Pisa in Italy had begun scientific operations following a technological upgrade.

The addition of a third interferometer is hugely significant for astronomers, as it enables the source location of a gravity-wave event to be triangulated with much greater precision than is possible with just two detectors. And if that position can be located quickly enough, astronomers using more conventional methods can train their sights on the sky to look for electromagnetic evidence of phenomena like neutron-star collisions.

Fourth black-hole collision
“The three-detector observation was made on August 14, 2017 at 10:30:43 UTC,” confirmed the LIGO Scientific Collaboration (LSC), adding that a transient gravitational-wave signal produced by the coalescence of two stellar mass black holes had been detected.

A scientific paper detailing the event, known as GW170814, is now in press for publication in the journal Physical Review Letters.

The waves detected this time are believed to have been emitted during the final moments of the collision between two black holes with masses about 31 and 25 times the mass of the sun and located about 1.8 billion light-years away.

“The newly produced spinning black hole has about 53 times the mass of our sun, which means that about three solar masses were converted into gravitational-wave energy during the coalescence,” added the team, which has since turned its attentions to another technical upgrade that should result in many more such observations in the future.

“This is just the beginning of observations with the network enabled by Virgo and LIGO working together,” says David Shoemaker of MIT, spokesperson for LSC. “With the next observing run planned for Fall 2018 we can expect such detections weekly or even more often.”

Jo van den Brand, spokesperson for the Virgo collaboration from Nikhef and VU University Amsterdam, added: “It is wonderful to see a first gravitational-wave signal in our brand new Advanced Virgo detector only two weeks after it officially started taking data.

“That’s a great reward after all the work done in the Advanced Virgo project to upgrade the instrument over the past six years.”

The Virgo detector joined the “O2” second observation run on August 1, after an extensive upgrade to lasers and other key interferometer components designed to improve sensitivity to the level needed to observe the tiny ripples in space-time.

The August 14 event was triggered with data from all three interferometers. And while Virgo is, at present, less sensitive than LIGO, two independent search algorithms based on all the information available from the three detectors are said to have demonstrated the evidence of a signal from the Virgo data.

Interactive skymap about #GW170814: https://t.co/4kEbrCFMhk
Try it!
Localizing the source of a #GravitationalWave event is a key challenge. pic.twitter.com/LwAg8X6cJG

Collision location
LSC scientists indicated that the addition of the third facility to the detection network has shrunk the volume of universe likely to contain the source of the gravity-wave event by more than a factor of 20 – although the precise degree of improvement depends on the exact site of the waves’ origin in relation to the interferometers.

“The sky region for GW170814 has a size of only 60 square degrees, more than ten times smaller than with data from the two LIGO interferometers alone,” said LSC, with Georgia Tech professor Laura Cadonati adding:

“This increased precision will allow the entire astrophysical community to eventually make even more exciting discoveries, including multi-messenger observations.

“A smaller search area enables follow-up observations with telescopes and satellites for cosmic events that produce gravitational waves and emissions of light, such as the collision of neutron stars.”

However, on this occasion none of the telescopes pointed towards the region of interest was able to pick up electromagnetic evidence of the cosmic clash – something not altogether surprising, given that no light is emitted during a black-hole coalescence. If the gravity-wave signal had in fact been generated by a neutron-star collision, some electromagnetic effects could have been seen.

Another benefit of the additional interferometer is that polarization information can now be observed, providing a better insight into the orientation of the orbiting masses, as well as enabling new tests of Einstein’s relativistic theories.

Caltech’s David Reitze, executive director of the LIGO Laboratory, concluded: “With this first joint detection by the Advanced LIGO and Virgo detectors, we have taken one step further into the gravitational-wave cosmos.

“Virgo brings a powerful new capability to detect and better locate gravitational-wave sources, one that will undoubtedly lead to exciting and unanticipated results in the future.”