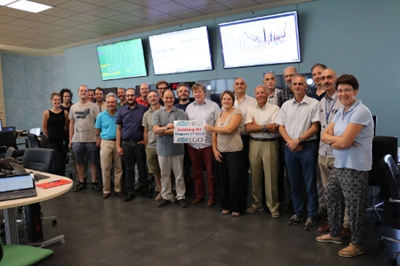 The VIRGO gravitational wave (GW) detector near Pisa in Italy has officially joined the current observation run alongside the twin LIGO facilities in the US – making it possible for the first time to triangulate the position of GW sources anywhere in the sky.

Scientists at VIRGO say that their system will collect data for the current “Observation 2” run (known as O2) through August 25, following a multi-year upgrade to the giant Michelson interferometer system.

Best ‘yet to come’
Giovanni Losurdo from Istituto Nazionale di Fisica Nucleare (INFN) in Pisa, leader of the “Advanced VIRGO” project, said: “Today, for the first time, we have a network of three second-generation detectors capable of localizing the source of a gravitational-wave signal.

“This is a major achievement and the best is yet to come: the sensitivity of the involved detectors will progressively improve and more detectors are expected to join in the next years, opening exciting perspectives for the multi-messenger investigation of our universe.”

Despite the recent upgrade, the VIRGO sensitivity is, for the time being, lower than that of the LIGO interferometers. But it is said to be adequate for confirming a potential detection with LIGO, and would allow locating sources of gravitational waves in the sky with greater accuracy.

The LIGO twins have so far made three confirmed detections of GW “ripples” in space-time generated by collisions between black holes, with those ripples detected milliseconds apart at the Washington and Louisiana sites.

With two detectors, it is only possible to narrow down the area of sky where the GW event originated. But with the addition of the interferometer in Italy, where the same GW signals will be sensed at a different time, it should be possible to pin-point the exact location of the GW source.

New domain
MIT’s David Shoemaker from MIT, spokesperson for the LIGO Scientific Collaboration, said: “While the detections to date with the LIGO instruments have been rich with scientific reward, we are really moving into a new domain being able to observe with three detectors. The deep collaboration between VIRGO and LIGO allows us to make the most of this new configuration.”

Federico Ferrini, the director of the European Gravitational Observatory (EGO), added: “It took many years of intense and innovative work to realize the ambitious objectives of the VIRGO upgrade. I wish to recognize the dedication of the members of the VIRGO Collaboration, of the EGO staff and of the participating labs.”

The collaboration comprises some 280 scientists and engineers from 20 different research groups across Europe, including those at INFN in Pisa and Rome, plus the Amsterdam team alongside representatives from CNRS in France, MTA Wigner RCP in Hungary, the “POLGRAW” group in Poland, and the University of Valencia in Spain. 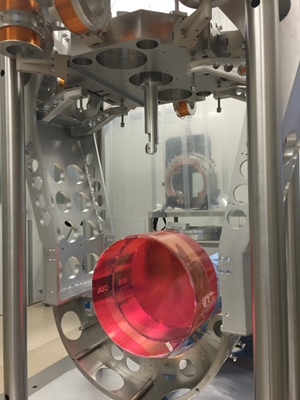 The O2 data-taking phase at LIGO started on November 30, 2016 and has already led to the discovery of a third stellar-mass black hole binary coalescence, known as “GW170104”. It was recorded January 4 this year and announced as confirmed by LIGO and VIRGO in June.

Upgrades next spring
While the present data run is said to represent the beginning of a new era for the VIRGO Collaboration, further upgrades are already in the pipeline. After the O2 run is completed at the end of August, the VIRGO team will work to further improve the sensitivity of the detector and to gain more knowledge about the main sources of noise that are currently limiting it.

“Then, a new upgrade phase will start, where several key improvements will be made, among which the installation of monolithic suspensions,” announced the collaborating team. “The mirrors will be indeed [sic] suspended by thin and strong fused-silica fibers, which will replace the current metal wires.”

Spring 2018 will see the start of the next commissioning phase, with the more sensitive detector scheduled to be up and running in time for the joint LIGO-VIRGO “Observation Run 3” (O3) starting later in the year.

“The months ahead of us will be exciting and challenging,” said Alessio Rocchi from INFN Roma Tor Vergata, the commissioning co-ordinator of the VIRGO collaboration. “These upgrades are promising further improvements of the sensitivity, while making the instruments more complex. Our commitment will fully exploit the new technologies installed on the detector.”