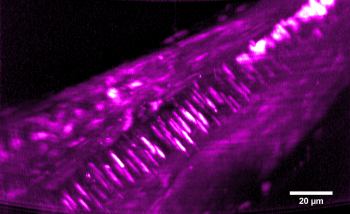 A new funding agreement between M Squared Lasers and the University of St Andrews will see the partners collaborate on technologies that may prove crucial in biophotonics applications such as the diagnosis of dementia and cancer.

Ties between the two organizations are already well established, but will be supported further with money from a UK government fund created by the Engineering and Physical Sciences Research Council (EPSRC) and the Industrial Strategy Challenge Fund, forming part of the UK's £4.7 billion increase in R&D over the next four years. The new collaborations are termed Prosperity Partnerships.

One focus of interest for M Squared will be continued development of Airy light sheet microscopy (Airy LSM), a technique based on patents from the research group of Kishan Dholakia at the University of St Andrews, for whom uses of the Airy profile are a long standing area of research.

Airy LSM is now being commercialized by M Squared for applications in a number of bioimaging scenarios..

"The basic LSM modality uses standard lasers that produce a Gaussian profile, shaped into a light sheet and used to illuminate the sample," commented Graeme Malcolm of M Squared. "This has all the inherent advantages that make LSM attractive, offering a large amount of illumination in a single shot while also controlling any potential phototoxicity."

But a Gaussian beam also has some limitations, in particular relating to the field of view (FOV) that it can illuminate. In many bioimaging scenarios, a FOV large enough to view multiple cells or structures and see the interactions between them is becoming the key factor in understanding complex systems; anything that limits the view is a potential problem.

Using a non-Gaussian beam profile termed an Airy beam is one solution. The non-diffracting and asymmetric nature of the Airy beam allows it to retain its excitation pattern over an extended FOV of approximately 600 by 600 microns, while still achieving sub-cellular resolution of around one micron.

"An Airy beam offers a sweet-spot of FOV, resolution and low phototoxicity, compared to other modalities," noted Malcolm. "The ability to image individual neurons has advanced significantly in recent years, but the difficulty has been to examine collections of neurons and see how they interact, and to understand their operation in terms of both architecture and function. Airy LSM can do this, and will help to tackle some significant large-scale questions about the details of brain function and disease development."

Airy LSM could prove valuable in stem cell research too, helping scientists to study sub-millimeter organised cell structures called organoids, grown from stem cells as a key step on the route to larger structures. A field of view large enough to see the entire cell structure of an organoid should make it easier to study the complete intracellular networks of developing organs.

More efficient commercialization
"We are working on both single- and multi-photon variants of Airy LSM, and the new Prosperity Partnership agreement will help to advance the technology forward," said Malcolm. "Although the technique has been used to generate auto-fluorescence in samples, it more usually requires an added dye or molecular tag for excitation, so one avenue of work through the Partnership will be to enhance Airy LSM's abilities to be used in label-free modalities."

Other techniques besides LSM are also part of the collaboration. Another topic of research will investigate boosting the signal-to-noise ratio in both Raman spectroscopy and Raman imaging, where precise modulation of the laser source should help to remove background fluorescence and stray signal information. A possible improvement in S/N by several orders of magnitude would then help Raman techniques realize their potential for detecting biomarkers and pathogens associated with several medical conditions.

The full Prosperity Partnerships program across all UK collaborations will involve £31 million of government funds, matched by a further £36 million from partner organizations in cash or in-kind contributions plus £11 million from the universities, for a grand total of £78 million in funding.

For M Squared and the University of St Andrews, whose research relationship has existed for a decade since an initial collaboration on chemical sensing technology, the Prosperity Partnerships also represent a recognition by UK government of the most effective ways to promote development and commercialization of new technologies.

"Our model as a company has been to work closely and collaboratively with universities to move technology out of the lab and into the marketplace," said Malcolm. "From our perspective, it is good to see the EPSRC agreeing with this principle by coming on board and aiming to make a positive difference to our business. The UK has a world-class science base but is not always successful at getting the results to market, and the innovation agenda that has been building for the last five to ten years has seen companies of all sizes engaging with ways to improve the situation. This will help a lot."