The 10,000 square-meter, four-storey site, completed a year after the ceremonial laying of its cornerstone, hosts test and measurement laboratories, clean rooms and environmental chambers, as well as an auditorium for seminars and training events.

PI says that the investment has created an additional 200 jobs, and brings all of its development teams together into a shared space. The intention is to promote “interdisciplinary exchange and collaboration in a creative workspace”, states the firm.

Company president and founder Karl Spanner said of that approach: “We operate in a high-tech sector that has a profound effect on the future. There are no modern high-performance microchips being manufactured that PI is not involved in.

“Motion, positioning, measuring, and controlling with the highest accuracy will continue to be our objective in the future and the main reason why we made the decision to build the technology center.”

ELT actuator supply deal
A huge new project that the company is about to embark on is the supply of more than 2000 high-precision actuators needed to control the primary mirror of the Extremely Large Telescope (ELT).

Scheduled for first light in 2024, the ELT will represent the largest optical telescope constructed so far once it is completed. The giant 39 meter-diameter primary mirror will in fact be made up of 798 individual hexagonal segments, each weighing a quarter of a tonne. 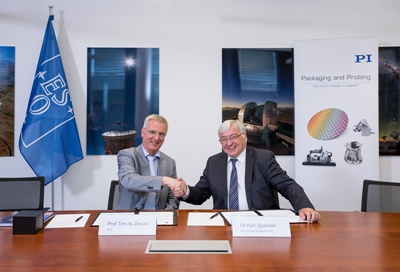 Each segment will use three PI actuators that both fix them to the supporting structure and provide precision alignment. “Only high-precision adjustment of the mirror segments makes it possible to compensate deviations from the optimum beam path, which for example occur as a result of changes to the height of the telescope, thermal effects or wind force,” explains PI.

To meet the technical requirements of the project, the company developed a customized actuator and controller concept. The actuators are based on a hybrid drive principle based on a motor-spindle drive and piezo actuator.

“Any inaccuracies of the motor-spindle drive can be measured with a high-resolution sensor and corrected using the piezo actuator,” states the firm. “This ensures the extremely high positioning accuracy. A dedicated controller controls both drives simultaneously and also controls the high-resolution position measuring system.”